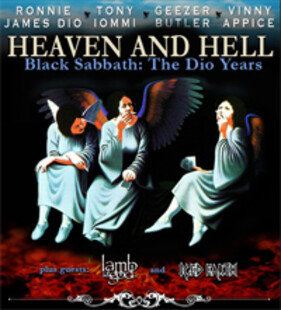 First of all I must apologise for the lateness of this review. I had meant to submit it a month and a half ago, but getting in tired from work is not the best frame of mind to start writing something, and other commitments and general laziness on my part have delayed its appearance. As, however, this was one of the best gigs I went to in 2007 I feel it only deserves a review, no matter how belated it might be.

I had been looking forward to seeing Heaven and Hell for months. Not at this gig, but at Wembley Arena the night before, a show I attended with friends and on the whole enjoyed. However, I had expected to enjoy it more - perhaps it was because I was too far back, or maybe I wasn't in the right mood, who knows - and so thoughts turned to attending the Brighton show the following night. Thanks to train times this was a possibility, despite the fact that I had work the next day.

I agonised over it for a while, then rang up the Brighton Centre box office.

"Do you still have tickets for Heaven and Hell tonight? To buy on the door?"

Right then. I can put up with only having 5 hours sleep tonight.

Strode into the Brighton Centre a few hours later and after purchasing a ticket, made my way upstairs to the main hall. I have been here a few times before but only for model railway shows, never for rock concerts. For an arena of I would guess 5,000-7,000 capacity, it's a pretty nice venue, like a large sportshall/conference centre rather than the concrete barn in an industrial estate that is Wembley. Iced Earth were hitting their stride when I entered the hall. They had been good the night before, and tonight was no different. The band were tight and heavy, and in Ripper Owens they have a superb vocalist capable of the highest range I've ever known anyone to sing with. He is great to watch and some of the screams he hits are unreal. The setlist, sadly, is all too short - only about six songs - but it's all quality heavy metal and puts me in a good frame of mind for the rest of the show.

[SPECIAL NOTE: As I write this, it is now well known that Iced Earth have parted company with Owens for former singer Matt Barlow. Personally I think this is a real shame and a surprise. There were no apparent ructions between the band onstage when I saw them and they were a solid unit. But back to the review].

Lamb of God set up. I resist the pull of the bar and move around to get a better view. I had missed out on seeing their set last night and was fairly curious as to what I would think. Well.... they have a couple of good riffs here and there. And they are heavy, and the moshpit is fun to watch. But really... it would have been far better for Iced Earth to have just played a longer set, and not bother with putting LoG on the bill at all. I don't mind the heaviness or the screamed vocals or the guitar tone, but please, please for goodness sake WRITE GOOD SONGS. You know. Songs with variety. Different tempos. Varying lengths. Textures, light and shade. It is just really quite dull to hear what is basically one average song over and over again for 45 minutes. Go and listen to a Rainbow album or something before you write your new album. Still, at least you aren't Trivium.

Enough of such matters. Tonight is all about one band. The ticket may say 'Heaven and Hell' [a good enough name in itself] but really it is Black Sabbath. Bollocks to the fact that it's Dio and not Ozzy singing, and that only Dio era songs are being played - it is still Sabbath to the core, and this reviewer has never had any problems deciding which era is better - it's all good music. The fact that this line up is finally back together and touring again is welcome news indeed to someone who picked up Heaven and Hell at 16 and loved it.

After the usual anticipatory wait, the lights go down, the crowd roars, and then the band are on stage - Dio centre, as usual, Iommi to the right and Butler to the left, who are the engine room of the band, and Vinny Appice on drums at the back of the stage set. And what a set - one of the best I've seen in a while, made to look like a graveyard backed by a church.

They open into 'Mob Rules' and heads start banging. It's a good version, with plenty of power, but perhaps LoG sent me slightly deaf or something, because it's rather quiet. I accept this and enjoy the song, but right at the end the PA finally kicks into life and the sound fills the hall. That's better! The it's into 'Children of the Sea'. Dear God. I'm standing right under the PA speaker, in front of Iommi, and the riff is HUGE. This is a heavy, heavy rendition and from then on things stay at the same level of quality. 'I', from 1992's underrated 'Dehumanizer' album is next, and it gets the horns flying. I only throw the horns a few times at a gig, but not here - when Dio is onstage, you have to do it - and to be quite honest, the band's performance fully warrants it. 'The Sign Of The Southern Cross' is another highlight, with a good wah effect on the bass from Geezer and yet another huge, deafening riff that levels the crowd.

'Voodoo' is a song that on record I've never really appreciated, but tonight it's vastly improved and much more energetic, getting me nodding along nicely. At the end, Dio and Iommi do a guitar/vocal call and response thing, which is a lot of fun to watch, and it makes me think - why don't more bands do this? Why not make playing in a rock and roll band look as fun as it is? Then the musicians, except Appice, retreat offstage and another 70s tradition is unearthed - the drum solo. This is not really the right thing to do five songs in, but Appice hits the skins hard and there are a few computer noises in the background to add variety. Perhaps another song instead would have been a better idea though, because the momentum of the show, which had been building nicely, is somewhat stalled for five minutes or so.

Eventually, though, the rest of the band take the stage again and 'Computer God' and 'Falling off the Edge of the World' with its excellent lyrics and another great vocal performance from Dio restore the atmosphere, which is worked up to a frenzy when after an almost Pink Floyd esque Iommi solo introduction the band charge into 'Die Young' - headbanging time and a great energizer for the crowd. But the real highlight of the set is to come when they stride into this line-up's signature song 'Heaven and Hell'. The crowd go apeshit, singing their guts out along to the riff, while behind the band three church window shaped screens hang down and suitable images are projected on them, making them seem like stained glass. This is proper rock entertainment at its finest, and not just banal disposable ten a penny stuff, but a real, honest, heavy metal experience that works into your soul and stays with you for a lifetime.

However, that's not all. The spotlight falls onto Iommi, standing ten or twenty yards in front of me, who launches into a good ten minutes of guitar soloing. Now Iommi is famed and respected for his riffs, but I feel his soloing has always been underappreciated, and this proves it. Put simply, the man is a master craftsman of the very highest calibre and it is an absolute treat to see him perform so well as close up as this. It's just great. His fingers seem to move comparatively slowly compared to someone like Blackmore, yet the flurry of notes pouring off the stage is astonishing. I have seen this happen with the Ozzy line up, in the solo at the end of 'Dirty Women', but all too rarely. The great thing about the Heaven and Hell format is that it allows Iommi and the others to loosen up and stretch out, and this has been noticeable all night in the extended soloing, the call and response in 'Voodoo' and the drum spot. It is great just how much improvs, freedom and creative power the band are able to unleash onstage - again very 70s/80s type stuff, but that's what makes it so fun!

Dio comes back on at about the fifteen minute mark, and adlibs some lines about being in heaven, with a white light shining from the roof, then adlibs about being in hell, and the lights below him turn red and plenty of dry ice erupts from the stage in plumes - fantastic stuff, and then it's back to the song to bring it to a climax, prompting the crowd on until they roar the title back at him, then the guitars come back again and it's back to the song proper. After the crescendo of the final verses, the band slows down and plays the main riff one more time, the crowd singing along as one. Twenty minutes of awesomeness.

The encore is, as expected, 'Neon Knights' and it's a great version, fast, furious, adrenalising and commanding me to bang my head no matter how sore my neck is. Superb stuff, although oddly they didn't play 'Shadow of the Wind' a new song written for a best of released earlier this year and one they'd played at Wembley the previous night. But not to worry.

Suitably deafened and sore, and in awe from seeing Iommi at work, I make my way to the station and the late night train, to share thoughts with others heading back the same way and to reflect on a great show I thought I wouldn't make it to. But I did, and in a year of great gigs this is a brilliant way to round things off nicely. Easily one of the gigs of the year, and leaves me feeling almost as euphoric and on an adrenalin high as a Maiden gig does as I wind down on the train, speeding back through Sussex.