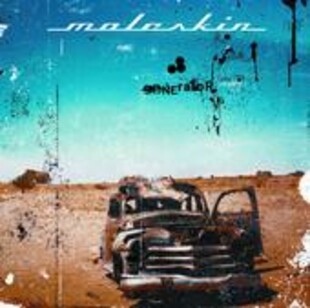 I've said it before and I'll keep saying it until folk listen up. Bands - keep your press releases short and sweet. I don't care how many gigs you've played and who with. I couldn't give a rat ass what guitar you use and what your stage set up is. What I am interested in is whether you can rock the golden gods from the bloody skies, 20+ joyless A4 pages doesn't tell me this, it's just damn tedious. Moleskin - this means you. Slim down the press pack, seriously.

Anyway - phew, onto the cd. Moleskin ply a classic sounding rock vibe, somewhere inbetween the seventies and eighties. There's significant nods made towards Zeppelin, Pearl Jam and Boston/The Darkness (whichever you prefer) and there's no doubt that a couple of the tracks on here are pretty decent foot tapping stuff, notably 'Twilight Fever', which admittedly gets off to a lumpen stuttering start but is forcibly dragged into a hard rocking highway burning anthem which makes good use of Julien Babin's powerful high range Geddy Lee-esque vocals and some darned fine riffage. 'Scream My Name' is the other upbeat track on offer and delivers the simple pleasures that we all crave from rock music in general, a verse riff we can punch the air to, a chorus that you know off by heart after hearing it once and a nice little breakdown chucked in before a predictable but oh so necessary face melting solo. It's uncomplicated stuff but this reviewer digs it.

It's the other four tracks here where Moleskin lose their way a bit. It's mostly plodding pedestrian sombre efforts that lack the direction and punch of their predecessors. It's ok, but it doesn't set the pulse racing and I found myself hitting the skip button too often. At the very least, you could credit 'Save My Soul' for trying something different for building a bit of atmosphere with use of jews harp and didgeridoo (not used enough by bands in my opinion) but too often the songs lack direction and the lack of interest quickly follows.

It's a bit of a shame as these guys are clearly talented and it's definitely good to hear such a decent vocal here. I reckon if they can stick to the keep it simple rock song formula and away from the brooding moody stuff then that would indeed benefit them. More fist pumping, less chin stroking please.