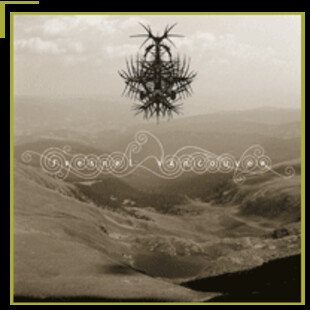 I'd heard Vancouver's mini-album before now, and was interested to hear their progression on this split 7". I had no idea before listening to this who the hell Fresnel were. This piece of wax features a one track offering from each band.

Side A features Austrian Fresnel. They released stuff a couple of years ago apparently but then retreated into the rehearsal room until now due to heavy line-up changes and are now minus a vocalist. Unfortunately I can't comment on whether this makes them better or worse. What I can say is that they're damn good. Big doomy riffs and a great production make this massively impressive. A heavy band that may tread the same road as many bands today, but who feature a refreshing new feel and sound to their tracks. The track 'Grim Fandango' is odd in that it feels like it's leading somewhere yet it never arrives. However, far from being a draw back, this makes the track sound innovative and original in its structure.

Side B features Swiss Vancouver. They remind me of Burst, although I'd say more interesting on the whole. Recorded in one take the track sounds really organic and has an immediacy about it that was perhaps lacking from their debut record. It's a powerful track that has some real riffs that jump out of the speakers and make you want to bang your head. A natural progression from the debut - not reinventing themselves or indeed the wheel - but there was no need to really as they'd already established a strong sound to call their own.

Vancouver are a great band and I can see them going onto better things after this, but are perhaps in danger of being labelled in the current swathe of so-called 'post-metal' bands. Which would be unfortunate indeed. Fresnel are a hidden gem, and are definitely worth keeping your eye on. If they can use their sound and keep it fresh across a whole album then they could really produce a stunning piece of work.