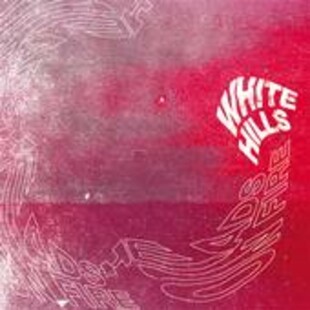 White Hills are a New York based space rock band. They're no strangers to British shores, having recently completed a successful UK tour. Julian Cope has been an avid fan since their inception and was also responsible for re-releasing the band's 2005 album 'They've Got Blood Like We've Got Blood'.

'Heads on Fire' is their latest release and will likely serve to further their reputation as purveyors of high calibre psychedelic space rock. The album kicks off in fine form with the high octane opener 'Radiate', a dense rocked out number awash with thick fuzzed out guitars and delayed clean vocals. White Hills boast a dense sound, adeptly heaping layer upon layer of effects drenched guitars, vocals and synths on a rock solid foundation of mammoth grooves.

There's definitely a hint of classic 70's rock to the proceedings but with a highly psychedelic bent. At times, White Hills remind me of their label mates The Heads, a comparison I make not just to illustrate stylistic parallels but also to emphasize the sheer propulsive power of the music. In spite of the jammed out nature of their music, White Hills also boast the rare ability to kick out some wonderfully structured locked down riffs. I'm talking the kind of riffs that Nebula wouldn't kick out of bed in a hurry.

I'd initially expected White Hills to plough through the entire album in much the same fashion as these opening tracks. Had this been the case, 'Heads on Fire' would have been a very good, no thrills psych rock album. However, White Hills have chosen to elevate their music by exploring more far flung territories. Just when you think you've got them pinned down, they throw a 26 minute curve ball in the form of 'Don't Be Afraid'.

Not only does this track break with convention, it also showcases a darker more brooding side to the band. The song grows from a dark hypnotic looping bass line into a monolithic sprawling jam that ebbs and flows with serpentine like grace. 'Don't Be Afraid' draws on post rock's dramatic melodicism but keeps one foot squarely in the past, incorporating 70s kraut rock and space rock influences. It's a truly majestic and absorbing listening experience, one that ranks along side the very best of today's so called 'post metal' genre.

As the final notes of this 26 minute epic fall away, White Hills reprise their love of speed and whacked out lead guitar. The closing track 'Eternity' crashes forth as a final triumphant wake up call, the band adeptly storming their way through one last blown out psych rock attack. A brave and refreshing move when most would have opted to close the album on a mellow note.

As it stands, 'Heads on Fire' left me completely satiated, having taken me places I'd never expected to go. It's wonderful to discover a band who so wholeheartedly embrace the past without ever letting it constrain their vision for the future.

I look forward to hearing more.