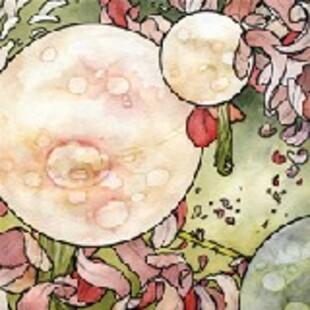 As with all my reviews of late, I have to start this one with a mini rant... this was released by Robotic Empire in America on vinyl with a free CD. Nice you may think, however they aren't selling anything more than one copy per person and they wont sell to anyone outside the USA and they are being very strict about this. The reason being is that it's being released in Europe by Rock Action. All well and good you may think. Well no, it's not, because here is the release schedule: Robotic Empire = 28th July, USA general release = 18th September, Rock Action = 15th October, European general release = who knows? Yep, you read that right, three bloody months we have to wait to get this record. Plus Rock Action wont be releasing it on as many colours as Robotic Empire and surprise, surprise, the colours with the smallest pressing have sold out long before the other colours with bigger pressings. Not that this really bothers me but it does feel as if Robotic Empire are out to get everything they can and have left the scraps for the rest. This is why I have chosen to download this album, I may buy the CD / Vinyl when I'm alowed but then again I might just not bother.

Anyway, on to the review. It's been bloody ages since I first came across Torche. I was scanning someone else's files for Floor and Cavity tracks and they pointed me to these guys as they are ex-members in some way or another that I've never quite grasped. I also managed to catch them live not long ago and as much as I like Floor, I was kinda let-down that they were still playing Floor tracks - more new Torche is what's needed and thankfully, that is at last what we get here.

Track 1 ('Warship') sounds like something else - it's the non 4/4 time signature that does it, but what it is I cant for the life of me work out. Track 2 ('In Return') is the one they have had on myspace for a few months now so you'll probably already be familiar with that. It's not however typical of the album - where as this is predominantly fast the rest of the album is at mid to slow pace yet all of it is undeniably heavy as the aptly named 'Tarpit Carnivore' demonstrates.

There isn't as much bomb string here as with the first album but the whole lot does retain that low end. This is also a very pop record, all but two tracks are under three minutes and it's all very mellow, any harsh vocals and nastyness is cast aside in favour of gigantic riffs played through even bigger amps.

I'm kinda torn between what I should think of this record. It's not even 20 mins long and this leaves me feeling like I want more, but then it's also over and done with, with no real distinguishing features and I'm on to looking for something else to listen to. Basically while this record is good, it's no better than their previous output and I think that both Black Cobra and Baroness have produced much, much better albums this time round. I've waffled on a bit here so if I was to sum up this records in one sentence it would be this: I was expecting more.