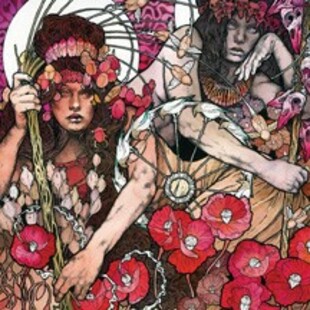 I've had a sneak preview prior to this of the new Baroness stuff and its different - different good or different bad I cant quite decide. It's defiantly not in the same vein as 'First', 'Second' or their split with Unpersons. so at the beginning of this new album I'm nervous, what if this is Baronessessessseseses's 'St. Anger'? God I hope not.

Kicking off with a minute and a half of gentle guitars and cymbal swells kicks us into some pretty awesome sounding drums but while it sounds huge I can't help feel there is something missing... and at 3:45 you find just exactly what it is. Violence. Gone is the guttural growl vocals and the blistering chop (slash) change strings all pinned down by brutality, replaced with singing, melody and all round mellow-ness. Some may take this as sounding more co-mer-shal as they'll say stretching it out a syllable at a time and waving their two fingered speech marks about but I don't think it is - and so what if it is, being good doesn't mean only a few people have to like it.

Track one and two kind of blend into one another, not like you cant spot the join, as in they sound very similar in style and riff while track five is a two minute acoustic guitar only track, you wouldn't be expecting that on their previous outings would you? Quite what they are doing with 'Teeth of a Cogwheel' though is anyone's guess, its all a bit too much Mars Volta at that point but old-school fans will probably be pleased with 'O'Appalachia' as this is most like their old stuff, faster and more aggressive while all this "oh they have been listening to too much Torche" probably stems from track 10, 'Grad', though it reminds me of Dove more, and can you really listen to too much Torche? I think not.

From what I can tell this is Baroness being happy with themselves and saying "you know what? fuck it, lets write something fun". It's a bit like seeing that punk girl you've always secretly had a crush on suddenly popping up wearing her Sunday best, her hair straight and with bookkeeper glasses on. Same person but looks different and you can't quite decide if its for the better or not but you still fancy her all the same. In this case I'm happy to admit that it's no better or worse than their previous material, it's just different and in my eyes a bold move and a welcome change. Lets just hope they don't forget to play some of the old stuff live eh?