High On Fire Death Is This Communion 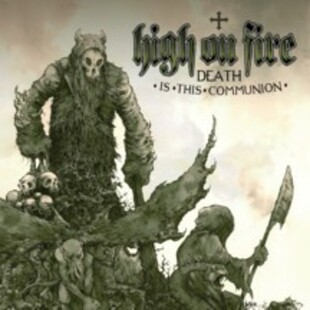 High on Fire... some love them, some loathe them. It seems that you can no longer like a band for what it releases any more, you have to critique their influences and past bands first. For me, High on Fire started from the beginning with 'The Art of Self Defence' which having never heard Sleep before, was a nice slab of slowish groove, dare I say, stoner metal. Then came 'Surrounded By Thieves' where they picked up pace a bit followed 3 years later by the Motorhead and 'Frost inspired 'Blessed Black Wings'.

With every release they have got faster and more metal, having listened to a sample of the new record on myspace and found it fairly similar to 'Blessed...' I was slightly disappointedly that they weren't now at death metal style speeds and encouraging us to kill ourselves when listening to their music backwards.

For this album, Des Kensel is playing a double pedal on his bass drum, which I find odd as when I played with High on Fire they let me use his drum kit (name drop, name drop, name drop) they specifically asked me not to play with a double kick as he didn't want his skin marking. I only mention this (yes really) because on the myspace sample the drums sounded really processed and really accurate, as if it was programmed, maybe it was programmed for a demo or maybe he's bloody good, but I didn't like it. Thankfully while the drums are not exactly sloppy on this they have that much needed human feel to them.

Okay, onto the actual record. Less than a minute into the album and I'm wanting to grab the nearest sweaty fat man with long hair, press my self up to the back of him in a slightly uncomfortable but still very manly way while he annoyingly whips me out of time with his greasy hair and throw metal horns to the sky recreating all my teenage years at metal gigs. They've taken the basics of 'Blessed...' and added spiky leather wrist bands, long hair and a bigger set of balls, and then turned it up to 11 right in your face. Even the semi epic title track at 8:34 long still drips with metal but also retains some of the slower groove from Matt Pike's earlier output. 'While Rumours of War' is just fucking RIFF-TASTIC and if that's not Lemmy doing guest vocals then Pike should be sticking rice crispies to his face and doubling for him at all public appearances.

Forums - - High On Fire - Death Is This Communion