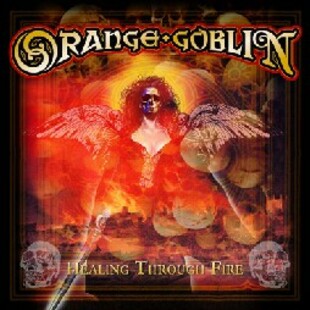 The recent good fortune that the Goblin boys have encountered seams like a fairytale after years of struggling against the tide. Sanctuary Records, Donington, dates with Sabbath etc must have felt a million miles away a couple of years ago as they admirably stuck to their guns. However all of this positive action would be smoke without fire (no pun intended) if the new album didn't deliver the goods.

Well, the first 5 minutes which go under the title of 'The Ballad of Solomon Eagle' pretty much make that question a no brainer. With it's powerful but natural groove it easily ranks with 'Blue Snow', 'Scorpionica', 'Made Of Rats' etc as one of the best things the band have recorded. Maybe it's the benefit of having heard this in the live set a few times prior to the album release but it's impossible not to shout along with the "I think I'm losing my mind" chorus after the second time around.

'Vagrant Stomp' continues with a fuzzy bass intro before Ben Ward's command of "Go" launches the track head on, again grooving its way out of the speakers. In case you can't tell that's the key word here...groove. It's always been there of course but it's been a while since it has sounded so effortless. Musically the band haven't particularly taken any one direction over another resulting in a real "complete" sounding set of songs. Touches like the mid song thrash in 'They Come Back' (another track which featured in the set seemingly ages ago), death style backing vocals on 'Hounds Ditch' and harmonica on the bluesy closer 'Beginners Guide To Suicide' are enough to keep proceedings rolling forward without sounding like they are going through the motions.

The vocals continue with the gruff style favoured over the last couple of albums but the lyrics which are loosely based on the woes of seventeenth century London give them a new lease of life and the album benefits from this new focus throughout. Even the running order is bang on with the brooding instrumental 'Mortlake' marking the home run and highlighting just how quick the album zips by. *As a side note - the bonus DVD is a good watch and features the almost complete set from the 2006 Xmas show. The sound is less than perfect but acts as a decent bootleg and overall works to capture the feel good atmosphere of the band live.

Easily Goblin's most consistent album since 'The Big Black', this is a total success and proof that good luck does sometimes deservedly follow hard work.