Baroness / Unpersons A Grey Sigh In A Flower Husk 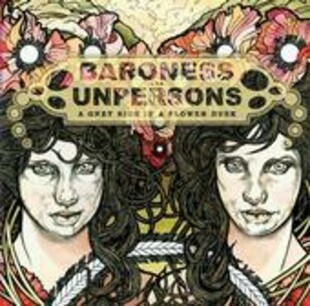 I'm writing this off the cuff on the first run through of the CD, which I'll add was a bugger to get hold off, but that's another rant all together. Anyway, this CD brings together Baroness and Unpersons. I'm a big fan of Baroness but I've never come across Unpersons before, so I'm looking forward (with slight reserve) to hearing this, especially as there are only two Baroness tracks, with what looks like seven by Unpersons - though only four of them are numbered so its anyone's guess what they really are.

So, to the Baroness half. As mentioned above, I'm a big fan and with all the talk of them going all Torche sounding (of whom I'm also a fan) plus the samples and clips on myspace I was a little worried that we'd lost the widdlyness and brutality. Fear not, 'Teiresias' starts off with some bombastic slow rifferey before kicking into the good old guitar solo intro fancy thrash sort of thing. This could have easily been lifted direct from 'Second' but is probably better. 'Cavite' is a different beast all together though, clocking in at 10:12 it's Baroness gone prog. The jury is out on whether this is a really good track or just four shorter good tracks glued one after the other with some filler, keep an ear out for the bit where the sound engineer seems to have wandered off with the mics while the drummer plays on regardless. Brilliant or balls, only you can decide.

Now Unpersons, it's actually fairly similar to Baroness in style to start with, fast bright sounding kinda tech metal but with what sounds like some drunk shouting all over it. Maybe not the best description but what they are doing, couple of nice time changes and interesting time signatures thrown in to the mix added with guitars that at times sound out of tune and badly played but in that "it works" fashion. Tracks 3 and 4 are pretty similar in style but come track 5 things are slowed down and more smooth and flowing. All in all I'm impressed with Unpersons and will be hunting out more of their stuff, post haste.

Forums - - Baroness / Unpersons - A Grey Sigh In A Flower Husk