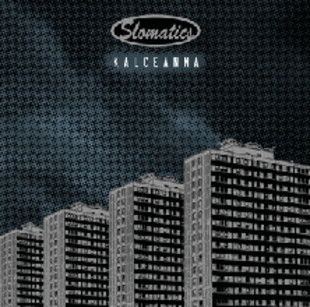 Slomatics new full length 'Kalceanna' has much in common with its Irish title. 'Kalceanna', which is Irish for 'storm', serves as a fitting point of reference for the thick dense music that Slomatics create.

Consisting of a mere two guitarists and a drummer, Slomatics have wilfully augmented the classic 'power trio' formation, choosing to do away with bass entirely. You'd be forgiven for assuming Slomatics were at least a four piece. Furthermore, you'd also be forgiven for assuming they had a bassist, because the sheer low end saturation they achieve is impressive to say the very least.

Slomatics construct lumbering, towering riffs, built on a solid foundation of simple yet effective rhythmic patterns. Vocals are used sparingly, delivered in a half sung, half shouted style that is well pitched in relation to the music. Joe's defiant delay soaked howl serves to punctuate and enhance the songs leaving the rest of the band with ample sonic headroom.

Throughout this album, the emphasis remains on the beautifully textured low end and crushing cyclical grooves. The band indulge in fuzz saturated, glacially paced riffs but never loose sight of the need for a good hook. Slomatics strike a healthy balance between low end drone and straight up stoner rock groove, wisely retaining a song based approach throughout.

Their sound isn't a million miles away from the now defunct US band Floor. However, Slomatics clearly have their own take on sludge and doom and it's one that will likely take them far in years to come. If the band continue to develop on their current trajectory and perhaps manage to secure a slightly slicker production job on their next record, they'll be set to destroy.

As it stands, 'Kalceanna' is a superb offering, one very worthy of your attention should you have any interest in good underground music.