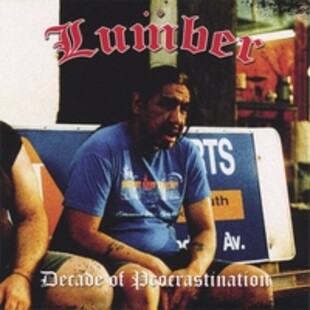 Drink! Drink! In these days when people like to get over analytical about pretty much everything, Lumber wade in uninvited, kick the post rock 'thing of the moment' cd from your hands, down a four pack in one and set about with the fucking rock and roll action. No unnecessary preamble, over complicated fancy musicianship, no thoughtful drawn out soundscapes, just a big bunch of fuzzed up riffs, shouty choruses and face melting soloing played at full throttle. Fucking yes! The formula for Lumber's success is pretty much a blueprint borrowed from bands like Winnebago Deal and Motorhead, but with a good time 'beer with your buddies' attitude wedged into the mixing pot. This CD is an adrenaline shot to the system - the deliberate lack of gaps between the (albeit short) tracks ensure there's no let up in the foot stomping, high fiving mayhem.

"Pull my dick mate, get fucked"

Highlights from the first six tracks on offer here include 'The Green Light' which crowbars a doomy interlude complete with sampled monologue into the 'you've got shit on toast for breakfast, you'll eat it and like it or I'll smash your face in' chorus heavy carnage and 'Chook' which snares you in with a beartrap of an intro before hogtying your ears and carting them off to the local butchers. However, the last finger in the eye remains... Just when you thought that Lumber were a one trick rock and roll speed bomb pony, the final track here serves up something completely different altogether.

'Woman Of The Black Church' is longer than all the other tracks on this album put together. A slowed down incantation booms over a menacing riff that was made for recreational use only, lead vocals are drastically changed from the screams and yells of previous and are replaced by some high pitched Beck style yowling. And then comes the feedback. Wave after unrelenting wave of tinnitus inducing white noise, all still with that one killer riff staying constant in the background. This assault usually lasts for about 15 minutes although it has sometimes been longer than that. Depending on your level of intoxication by this point, this track can vary greatly from being totally hypnotic to a little bit tiresome. So, get the bloody beers in and feel the bloody width is my recommendation.

This is excellent. Lumber rule. Out loud. Go and get a copy of this and now.