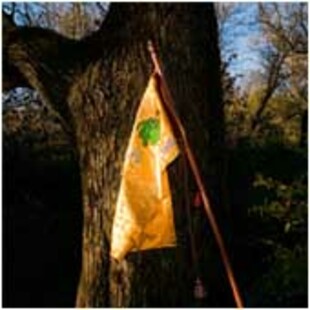 'Black Branches' opens the record with a swirl of delayed guitar, propelled by jazzy free form drumming and fuzzed out bass. Near indecipherable vocals echo through the mix like the incoherent utterances of some demented woodland shaman. Chants, yelps and willfully atonal vocal lines rise and fall, melting seamlessly into the whole.

The band conjure a veritable wall of sound drawing on folk, free form punk, psych rock, noise rock, drone, krautrock and doom. It's an impressively diverse melting pot of styles, one that makes for a highly potent sonic brew. This album offers everything from blissful meandering jams to explosive moments of pure psychedelic freak out. Raccoo-oo-oon's music is wildly diverse yet remains strangely coherent, unfolding with an eerie otherworldly atmosphere that defies convention.

There's clearly an element of improvisation at work on 'Behold Secret Kingdom' but never to such an extent that the songs descend into directionless nonsense. Everything is well structured with a highly competent grasp of dynamics. It's a gorgeously noisy, experimental and groove laden affair which offers up more than enough in the way of subtle touches to keep you coming back for more. Be it the slabs of effects drenched guitar, the subtle use of field recordings or even the occasional sax workout, Raccoo-oo-oon will keep you entranced for the duration.

Comparisons to other bands come cheap and I'd be hard pressed to compare them to any single band. In the past Raccoo-oo-oon seem to have been lumped in with the 'new weird folk' movement but to my mind their current work simply transcends genres. 'Behold Secret Kingdom' is a remarkable little oddity and Release the Bats records deserve thanks of the highest order for making it available.