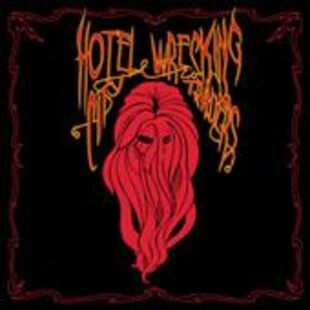 Instrumental stoner rock isn't a sub-genre with a lot of room for manouvre. Karma to Burn set the template and by and large those that have followed, in many ways, resemble the West Virginian's mode and sound. Despite this, the few stoner-rock-sans-vocals albums that do reach my ears tend to be very good, almost every time (think Stinking Lizaveta, Rotor or Mothertrucker).

The reason for this is due to two reasons - there simply aren't many bands doing it and therefore tiring the sound, and, crucially, because instrumental bands have to make up for the lack of focal point a voice provides by working double time. In stoner rock terms this equates to more riffs, pure and simple. Hotel Wrecking City Traders, an Australian two-piece, match up to this premise in a fine manner.

Opener 'The Porch' begins with a familiar warm glow of fuzz guitar sound and inevitably Karma to Burn do spring to mind. Garcia-less Unida is another reference point it generates, but despite the obvious influences, it is a great start. The following 'Massolli' is even better - the highlight of the EP - more distinct, less obviously placed on any influence and probably the better for it.

The attraction to "going without" is clear - stoner rock is one of the last signposts on the scale of underground rock and metal where, for a large part, the vocals are properly sung. Therefore your whole attraction can be based solely on the qualities of the singer - and a weak vocalist can ruin your sound (and there's many a stoner rock band where this applies). The quality of the riffs and the rawness of the rock here though deserves to stand out, not to be spoiled. Indeed, third track, 'Get High Motherfucker' sounds like (in title and song) one of the bad 'rawk' moments Hermano seem to slip into now and again, only better here as it's without the vocals. And that's John Garcia I'm talking about.

HWCT do try and diversify the sound a little towards the end - something that is a must before even the best instrumental records begins to lag - the classic 'Almost Heathen' album even struggles to hold interest towards the end. Rotor managed to do this on 'II' by adding a vocal track (cheats!) and Mothertrucker moved towards Pelican-esque stylings. Here, the 'Traders diverge towards a doomier sound.

After the playful opening guitar of 'Sutter Cane' passes (a rare moment where not enoug ideas are crammed into a track), 'Danklicker' ushers in a traditional doom Wino-band vibe, and the EP's interest is prolonged for the change. Closer '7 Minutes of Tape' even treads dangerously close to drawn-out droned-up doom, and while not exactly exciting, does provide that essential variety. I am left wondering whether a different track order may have suited better so that these don't feel lumped on at the end, but then I'll never know.

Where they go from here - whether they can maintain interest over a longer release for example - will be interesting to see. For now though, 'Hotel Wrecking City Traders' is another fine instrumental release, one I suggest anyone with a passion for stoner rock and riffs check out.