Minsk The Ritual Fires Of Abandonment 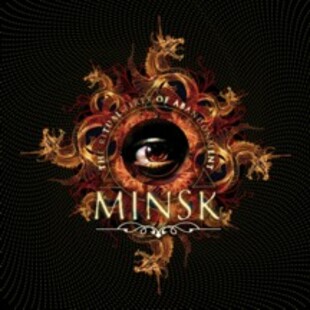 I was in Nottingham's famous Select-a-Disc music store when out of nowhere, crashing in over the speakers came some rather original music. I went over to the man behind the counter and thus I was introduced to Minsk. I had heard their name before and discovered later that I had actually listened to their previous album before at a get together of friends.

On this album however, Minsk had certainly pushed the awesome meter up a few notches. No longer were they the kind of band that 'you should check out if you're into this, this and this', but rather a different monolith, transformed into a musical machine that your eardrums could not ignore. 'The Ritual Fires Of Abandonment' smacks you over the head for attention, rather than the polite 'excuse me' you may have encountered before. Don't get me wrong, 'Out Of A Center Which Is Neither Dead Nor Alive' is a cracking listen, but on this effort Minsk have pulled out all the stops.

A quick digression if you'll permit me: Relapse have reached a point were they are obviously making enough money to get back to basics and say "Fuck it, we can release what we love again now, rather than that here-or-there stuff we did a few years back for a while". With reissues of Harvey Milk (manna from heaven), Baroness' debut album (fuck yeah), Rwake (yum yum) and this, Relapse are really becoming a force to be reckoned with for quality, not just quantity again.

Minsk's new opus opens with the thunderous 'Embers' and doesn't let up until the last cyclic spin of the CD. The production of this CD is amazingly organic, but without 'organic' being a replacement term for 'grainy', 'fuzzy' or 'we couldn't afford the recording equipment we really wanted'. Everything sounds huge: patina upon progressive patina of sounds interacting and reacting off one another, giving the record a real life force of its own, both in terms of its musically eclectic vibrancy and also the fact that this is a record that suggests it will last the tests of time.

However, 'The Ritual Fires Of Abandonment' (ace name for a record by the way) is not what I would say qualifies as a classic record. Whilst it is brilliant, I feel that the record could be a little more direct in places and that some songs could have done with a little cutting in the writing process. Most of the tracks feel like they have enough ideas for two, maybe even three songs. That because they fall into the bracket of the New Wave of Post Metal (NWOPM - roll's off the tongue, doesn't it?!), they must record songs past the 10 minute mark seems a little misguided, and perhaps more to do with what's expected of this 'new' genre right now. I'm sure it's not a conscious move of the quartet but a 9-10 track album with tracks around 6-7 minutes might suit their eclectic mix of sounds and influence a little better than the large pots of ideas that the three main tracks that comprise the main body of 'Ritual Fires...'.

Overall though Minsk offer up another offering from the NWOPM that is gorgeous and just takes your breath away. There's a lot of these bands about, but with any genre you just need to sift through the sand until you find those diamonds in the rough. Minsk are one of those diamonds.