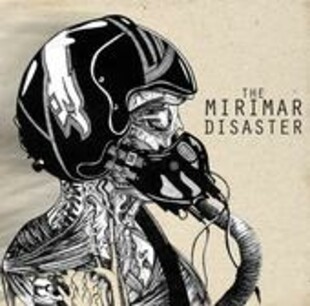 You know when you're drunk, and you say you'll do things, and then when you sober up you realise you've left yourself in a really tricky position? That's me right now. I've spent days puzzling over how to go about this review. Worried about being accused of buttering up my mates if I'm too positive. Worried about picking hairs to seem impartial. Then I thought fuck it, I'm sure I can muster some objectivity...

So, it's been a long time coming, or it feels like it, anyway, but I finally have in my sweaty mitts the most eagerly awaited debut album from a Sheffield band since NME conned everyone in London into believing that the Arctic Monkeys were really good. Can it match the hype?

Well, it certainly looks the part. Gloriously offbeat artwork, cryptic lyrical excerpts, artfully moody band photo... it's all here. Now, I suppose I better talk about the music. I must admit to a certain amount of concern that I may have been too familiar with the material to really give this album a fair go, but that soon passed me by. Finally hearing these tracks in recorded form gives them a whole new lease of life. Even the three songs that originally appeared on the band's demo a couple of years back are rejuvenated, care evidently having been taken to iron out the odd crease from those early recordings.

For those not familiar with the Mirimar experience, their 'sound' is a hard beast to pin down, which is no bad thing... throw healthy chunks of Isis, Mastodon, Old Man Gloom and Botch into a pot, season liberally with Pantera and a bag of weed, leave to stew for days on end, you might get somewhere nearby. There are big riffs, epic grooves, soaring, twinkling guitar interplay, off kilter angularity, the whole shebang. Not to mention some truly distinctive vocals... they might not be to everyone's taste, but at least they are unmistakable, something to cherish in a scene dominated by monotonous growls and squeals. One of the most enjoyable aspects of hearing this album for me has been picking out the lyrics, putting words to the sounds I've been hearing for so long. And it's been worth the wait, just to finally have proof that Stocky isn't shouting, 'You're gay!' at the start of 'The Thinking Tree'.

I haven't gone into individual songs, you notice... I find it hard to play favourites - every time I pick one out, I soon find another. If I start to think one track is maybe that bit weaker than the others, it'll do something interesting and regain my faith. Historically, I've always had a soft spot for 'Dik A Der Der' - shit, sorry, I meant 'If Lockheeds Could Speak', a truly epical musing on the private thoughts of a stealth bomber, but here its fellows stand equally tall.

So much for the good stuff, I need to look at the other side of the coin, right? Hmmm... well, in all honesty, and running the risk of that hair picking I was talking about, the production isn't all I might have hoped for, the guitars lacking punch in places and the vocals a tad overbearing in others. But it does the job, massive production heroics will keep for when someone wakes up and lobs a load of cash at them to record the next album.

In summary, if a British band makes a better album this year, I'll do something ridiculous involving an animal. Even my housemate who only likes thrash metal and Iron Maiden has just borrowed it for a listen, that's the power of the Dizzle...