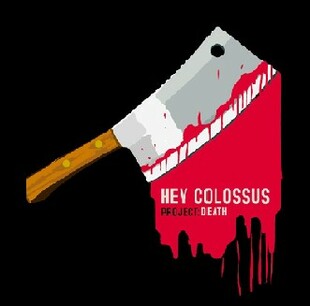 Recording an album in December and releasing it in February is a mean feat, and who else could do it but Hey Colossus? Always purveyors of the most heavy and balls-out rock, they have gone into the studio to create what is their most direct and striking release yet (and those equal about a dozen now anyway!).

Starting with the staggering Melvins-on-cider 'Do They Ever Return' they play on a simple yet engaging riff that they carry and develop through the songs gargantuan fug of production. Always heavy anyway, the addition of a member playing not much bar a Kaospad, the overall cloud of sheer bass that consumes this release shows you what they aimed to do here, and that was to do what the merry hell they wanted.

Second track 'I Am The Chiswick Strangler' is a lightning bolt in the form of a stoner rock riff that passes by faster than any Hey Colossus track previously released, it really sounds like it was fun to record, you can almost see the classic rock poses and shit-eating grins. Onto the less paced, but focused '45 Pounds' this is where you can see how far HC have come as a band. This brings back echoes of their album 'II' but with a more thought-out groove and vocals that vary between throaty screams and stoner-like mantras. The bass again is so far embedded into this album that it takes over the whole feel of the music, and for me, it elevates and already fantastic band even higher, you can actually imagine foundations shaking and neighbours complaining. Melodic as it is heavy, instrumental 'Frozed' has shades of Pelican about it, but with that still-strong Hey Colossus identity, slow and lumbering, the fuzz of static over the top is atmospheric as it is claustrophobic.

With this set of songs, Hey Colossus are showing a much more dark, almost threatening side to their musical explorations, even down to the b-movie cover art, a dripping, bloody axe and the simple facts stated, where and how it was recorded, the song titles and that's your lot, a kind of two fingers to convention, nice.

'Rope Assassin' comes in with a crash and the patented scratchy production so common on HC releases rears its head again, sounding like the vocals are being screamed down an old, crackly phone line really adds to the pummeling nature of the riffs on show here.

Album highlight comes courtesy of the fantastic 'On The Pleasure of Hating' a frenetic and strangely, dare I say it, metal song? Its fast, it doesn't let up and is incredibly crushing. The last section, complete with more Kaospad tomfoolery plays out like a jam and dies in a slew of feedback and static, the way songs should.

Closer 'Grow Still At Last' is a slow-burning exercise in bubbling-under intent, as it dies down into electronic ringing you are left wondering where the hell they can go after this, an excellent introduction to the band for a newcomer befuddled by the vast back catalogue, and an excellent addition for fans of the band. Cracking.