Errander The Need To Know 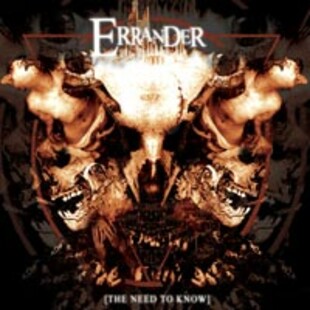 Errander (formerly known as P>S>P for those not paying attention) are referred to by the lovingly produced In At The Deep End biog accompanying the album as 'combining all out thrash riffery, head banging metal and hardcore stomp with a splash of melody for good measure' and to be fair, that's about as succinct and accurate a description of what's on offer here as you could hope for.

Brilliant. Job done, I'm off down the pub.

The 33 minute onslaught (which is undeniably the right word for it) gets under way with absolutely ZERO messing about with all instruments roaring and Ryan (also of GU Medicine 'fame') screaming his not inconsiderable lungs out without even a seconds preamble and proceeds to continue at that particularly violent tempo for almost the entire duration. Make no mistake, this is blistering stuff with even the more melodic moments barely dropping the break neck pace. I think it's safe to say there isn't a duff track here although as a result of the sheer ferocity it's rather difficult to pick out highlights as the album tends to explode past you in such a jagged, Metallica-having-a-bar-brawl-with-Converge-on-cheap-speed blast that you can often accidentally miss half of it in a flurry of air-guitaring before you know what's going on.

Personally, I'd have to say that some of it can get a bit too choppy for my tastes and some of the more melodious passages can seem a bit crowbarred in for good measure but on the whole it's a nice mix of styles. Add to that the very crisp production and beautiful presentation (I defy anyone to ever accuse IATDE releases to be found wanting on these fronts, of course) and there's very little room left for grumbling.

So, do you (The) Need To Know about this album? Yeah, I'd say so. Anyway, I'm off to kick some poor bastard shitless to vent all this surplus aggression I'm feeling all of a sudden. Dunno where that's come from... *cd finishes* Oh no wait, I'm alright now.

Forums - - Errander - The Need To Know