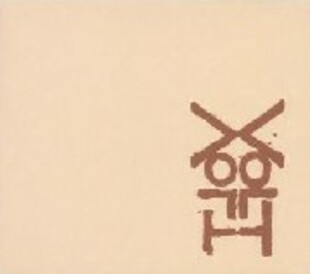 The first I heard of Volt was their debut EP. A taut, short spring of a release tightly packed into a metal tin. The description on the tin compared the contents to Melvins and Jesus Lizard. I quite like the Melvins and I can hear the comparison in some ways but I have not heard any Jesus Lizard so, can't really confirm or deny those rumours.

The CD case for this new album from Volt comes in a lovely, very non-metal cream and brown. It has little in the way of real 'design' about it but is nonetheless very aesthetically pleasing and has some of that eye-tricking fuzzy text that you find on those naff 'If you can't read this...' t-shirts.

I'm filling space with the above information to be honest. Not because this album isn't good, quite the opposite in fact. It's not because I can't think of anything nice to say. It's because I don't want to just 'superlative' out a load of snappy lines that fail to adequately describe what Volt have come up with here. And as enjoyable a listen as this stuff is, it's fairly hard to describe. There's an edge to the guitar sound that is certainly in part 'Melvinsy' but the fuzz that Volt employ is of the trimmed kind. No flab, no real reverb, like a nicely trimmed pack of that play felt stuff in which all of the shapes are of course, righteous and rocking. The bass and the guitar seem to rarely stray far from each other and this adds weight to the intensity that is almost always present. Song after song they attack from the beginning. Even in the slower parts there is a sense of build-up and intention. There is a sense of direction and the music seems to be being dragged at high speed toward it's destination resulting in the feeling of the players gripping their instruments (no sniggers please) with fervour and holding on for dear life.

The tension occasionally relents but there is never any feeling of release, just a pause before another headfirst, insatiable plunge towards some unknown aim. It is a credit to the band I think and to their playing ability that they are able to bang out such frenetic music in a way that sounds constantly tight and controlled. The crisp drumming, precisely timed guitar and bass and the vocals that fit the music perfectly all combine to create the momentum. Perhaps the closest example I can think of of a similar sound would be early Helmet, in that they too to created a sound with a seemingly singular direction and drive.

The songs on Rorhat rarely step over the four-minute mark except for the closing track 'VLT'. This contrast to the preceeding tracks could be termed as an atmospheric slow-plodder with twelve minutes or so of hushed, almost spoken word vocals and minimal guitar, bass and drums. It is an almost achingly slow pace compared to the rest of the album but never seems laboured or forced. Volt can apparently offer variety as well as voracity.

This is another top release from the increasingly reliable Exile on Mainstream label. If I were to pick one word that best sums up Volt's sound and this new release 'Rorhat' it would probably be tension. Or maybe coiled. Or maybe frantic. Or maybe just awesome would do it. Yeah, I think that about sums it up. Awesome.