Beehoover The Sun Behind The Dustbin 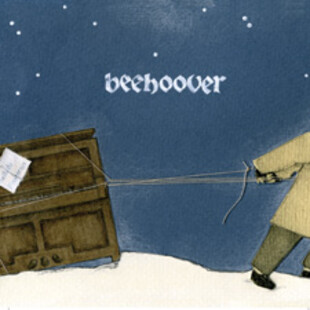 I'm really glad I'm reviewing this album. If I hadn't been, I couldn't swear that I would have given it more than a couple of listens through before retiring it to the back of my CD collection, unsure as to what I had heard and it's point. Thankfully, for my sake, I am, and the depth revealed upon repeated listens to 'The Sun Behind the Dustbin' show an album of rare originality and occasional beauty that has become a mainstay on my stereo.

Beehoover's music is hard to categorise - their website mentions avant garde and jazz, but then that, to my uncultured ears, means it's a bit weird and mixed up. Which, I suppose, it is, but it doesn't go anywhere near explaining what it sounds like. On the whole, Beehoover have a base template of psychedelic doom rock, stripped down due to the make up of their band - a two-piece drummer and bass/vocalist combo. Add in a willing to experiment, a proggy, Krautrock inspired eclectic nature and it brings us as near as I'm going to be able to explain it.

The more you listen, the more it grows on you, and the more it all makes sense - where before it sounded like a purposeful mess, now you hear the song structures truly mapped out, and it's a liberating enlightenment. Where as originally second track, the fascinatingly titled 'A Foul Smelling Wheel Called Downhill', appears a simple song with a breezy stoner rock sound, awkward vocals and too long by half, later listens expose how the track builds magnificently until the heavy bass ending.

'Paraffin Oiler' is even better. The track veers from quiet, minimalist passages, complete with the sound of gulls and the sea, to verses of impassioned vocals over more forceful bass lines. Singer/bassist Ingmar Petersen's voice really shines here. The album takes a pleasing turn on the following track, 'Nice Romantic Evening', with Petersen dropping the bass for one of only two songs to introduce an acoustic guitar. It's a welcome change in the album, and the song itself is beautifully mellow, although the lyrics betray a bizarre comical story, each verse cumulating in the lines "So spread your legs, I'm coming home".

There's more gems beyond there - 'Damn You, Charlie Brown''s bass groove, found behind the sporadic rambling vocals, something Les Claypool would love to call his own, or the quicker second acoustic track, the toe-tap inducing 'Spinster'. The album does tend to suffer beyond then a little, the weirdness, the loneliness of the raw bass sound starting to meld together, your concentration occasionally wandering. But it's the only complaint I can give the album, once the initial barriers of apprehension are broken down through persistent listening.

This isn't something I would have guessed would have warmed me so much as it has. Scepticism (and plain old dislike) were my initial feelings towards 'The Sun Behind the Dustbin', the flecks of doom keeping me from dismissing it too early. What emerges, and whether you like the album or not it is a truth, is an album that is unique, an accolade rarely used in earnest nowadays.

Forums - - Beehoover - The Sun Behind The Dustbin