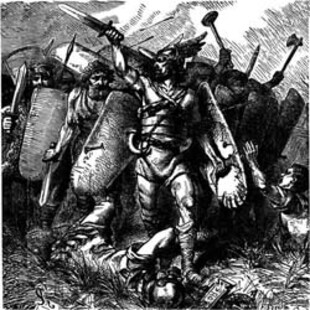 For those not in the know the two epic studio tracks included on this release were initially released as a split 12" mid way through 2005, and was reviewed by Pete - read the review by clicking here. The version being reviewed here is the CD issue of the tracks which comes bundled with some additional live tracks, three from Blood Island Raiders and four from Among The Missing making a whopping fifty eight and a half minutes of music for your money. Bargain.

So, on to the tunes. Blood Island Raiders kick off proceedings with 'Night Of The Frost' an eleven and a half minute unapologetically Metal epic. The first thing that struck me about the track was the great production values on display, crisp and clean drums, a wonderfully warm bass tone and a great crunchy guitar, all topped off with a strong vocal performance from Warren that really sets this apart from a lot of the current crop of UK Stoner/Doom/Metal bands who often seem afraid to actually show some decent tuneful singing. Not that I'm averse to some throat shredding screams and growls and the like, but it's refreshing to hear someone with the balls to throw a bit of melody out there. The track itself starts with a nice slow build up leading to the aforementioned vocals coming in over a straightforward pattern on the bass and drums. The introduction of a slow building guitar cranks the first verse up to a satisfying crescendo then drops out again for the second verse only to build back up and launch into an utterly hummable and catchy chorus. The obligatory solo is a a good melodic counterpoint to the peak and trough dynamics of the main body of the song and doesn't stick out as being there merely for show boating purposes. All in all a good dynamic song that easily keeps the interest for the duration. The live tracks on offer are: 'Armageddon', a slow brooding chuggy number, 'For The Sake Of Clarity', a chugging Metallica (early Metallica thankfully) flavoured tune, and 'God's Breath Is Steel', another brooding yet melodic piece. The production on the live tracks is, again, outstanding and paints a very good picture of the bands capabilities.

Among The Missing weigh in with 'Horses For Corpses', which at just over sixteen minutes could be an endurance test for some but I'm pleased to say it works well. 'Disorder Of The Templar' (Among The Missing album from last year) was one of my favourite releases of 2005 so I was keen to see what they'd do with an extended song and the answer is: total Sabbath worship. Things start off quiet enough with some backwards masked voices fading in and out in an admirably sinister manner before a quiet, delicate, introduction works it way out of the speakers. All of which lulls you into a false sense of security before the band kicks in with some meaty down tempo riffage that gives way to a Sabbath flavored freak out in the vein of those mental middle eights that Iommi, Butler and Ward were so fond of. Tim's vocals seem quite restrained compared to some of the more aggressive tracks from 'Disorder Of The Templar' and he tends to keep things to a gravelly semi sung style...... at first. Around the six minute mark things kick into more familiar territory with a strong chugging mid tempo workout replete with some low end growls and screams. Then things shift down a gear into the next section with it's gratuitous homage to (dare I reference them again?) Black Sabbath - 'Black Sabbath', which fills the rest of the run time eventually collapsing in on itself in battering, clatter of war drums. Great stuff. The live offerings from Among The Missing are: 'Cobra', an up-tempo punky number, 'Narcissistic Sports Pimp', a slow burning chuggy number, before closing things with 'Trembling Before' and ''No Claw Draw', mid paced sludgy numbers dripping with venom. My only slight complaint with the live tracks would be that Tim's vocals, especially on Cobra, sound like they're suffering from satellite delay but hey if they sounded exactly like the studio versions then what would be the point in that?

All in all a superb release, well worth your hard earned cash.