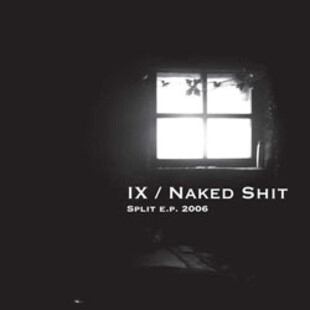 Now this is horrible, and not horrible as in "Oh God, turn it off", it's horrible as in the kind of guilty pleasure one takes in vomiting after a night on the booze (in the case of IX, Bucky), or the feeling of insignificance when dark clouds gather above your head.

A split release to coincide with their small tour earlier this year, London's grimmest defecation-monikered 2 piece shared a van and this CD with Scotland's slowest export, IX. What we have here, is four tracks that last just over an hour, but it sure feels like longer.

IX step up first, albeit with the speed of a weighed down mammoth, to deliver first their heavy opener 'Sleeper' which starts pleasantly enough before crushing you under its weight, its use of dual guitar at this speed is inspired, and really adds to the dare-I-say it Khanate-like feel of their sound, strangely, as the song expands, it almost becomes uplifting in its constant plod towards the end, in the same way Crowbar manage, sympathy followed by euphoria. Their second track 'The High Handed Enemy' starts off in the same way, slow and melancholic, until a fearsome fast part (fast for IX) rears its head in an almost black metal way, the chord progressions simply reek of Norway, perhaps bassist and singer Gus and co are secret church burners? Perhaps we will never know, intense stuff.

Naked Shit then crap all over what you thought was heavy, by simply being as heavy as they can make their instruments sound. Tim, sorry, 'The Host Sepia' and Linds, here known as 'Stonerwitch' begin their daftly titled 'All That Gary Glitters Is Gold' with the sound of rain, followed by snare rumbling notes, this continues for what seems like an aeon, before the goblin-esque vocals begin and the long descent into your own depression begins. The constant drone and Linds' non-doom-conforming drumwork add to the claustrophobic nature of the 'Shit. At times, the guitars are so densely layered, it sounds like a nackered Dyson, or a broken food mixer, quite why anyone would listen to this for pleasure is anybody's guess.

To close, Naked Shit decide to fuck with our heads even more by covering, or should that be 'covening' 'Silver Machine' by Hawkwind. It is unrecognisable as such, instead sounding what it would be like if you gave Lemmy a tranquiliser and told him to play at a tenth of the speed, and asked the rest of the band to just be sick or retch over the top. This is not a criticism, it is perhaps testament to Naked Shit's refusal to play doom in the traditional sense, or any other sense at all - truly disturbing, and will kill any party.

And everyone who hears it most probably.