Zamarro The Beast Is On Your Track 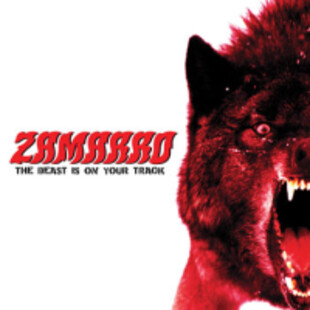 Being a band from mainland Europe must throw up a basic problem - choosing what language to sing in. Use your own, and alienate pretty much everyone outside of your country, or use English and risk alienating everyone everywhere. Although this has already been discussed elsewhere (see the recent review of Heirs to a Vacant Throne's 'Miasma') it plays such a part in listening to Zamarro's music that it can't go unmentioned. So how bad is it? Well the accent's not too strong but while the lyrics basically make sense they're unfortunately poor at best and, while desperately trying to get across some kind of fast living debauchery, throw up such unconvincing fare as 'Let us play the roles of Laura Dern and Nicolas Cage'.

As for the music it's pretty much straight ahead, punk influenced, hard-rock and while it's competently played and backed up by a solid production (courtesy of Jack Endino) there's absolutely nothing here that lifts the album, or the band, from the lower regions of mediocrity. Nothing on the record really stands out and song after song pretty much follows the same no frills, basic rock, formula. 'Tequila Ride' and 'Dance Without Sound' almost buck the trend - the former starting with a half decent, almost stoner, riff and the latter making use of a driving bass line and subtle guitars before ditching them a couple of minutes in for more of the same.

All in all Zamarro, whilst not being the worst band on the planet, suffer from a complete lack of anything approaching inspiration or variation which along with the poor lyrics leaves very little to recommend.

Forums - - Zamarro - The Beast Is On Your Track