These Arms Are Snakes Easter 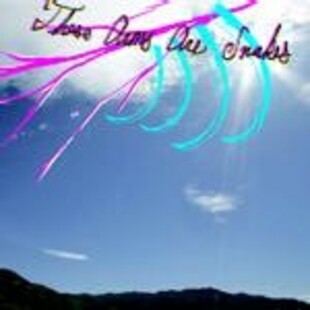 I'll warn you now, once again I'm reviewing a band I absolutely adore so please don't be surprised when you find it dripping with my trademark fanboy exuberance.

You may now continue...

These Arms Are Snakes, despite featuring a former member of the almighty Botch, seem to be a reasonably unknown commodity amongst a lot of people involved with this music 'scene' of ours and (rather unfortunately for me) attempting to describe what they sound like can often prove somewhat frustrating as the person you're trying to describe them to will invariably end up looking rather confused and distinctly less than impressed. As a result of this I shall attempt to set the tone for this review by describing what the band are doing, rather than their sound.

Basically, TAAS are somewhat of a rarity in that, in this day and age where every guitar band going are desperately trying to convince you that they're 'The New Heavy' whether they even have the slightest understanding of what that term might mean or not, TAAS are furiously trying to convince people that they're NOT heavy when they're actually skull crushingly so. 'Interesting statement' some people will no doubt think, especially those who do know any TAAS material but let me explain further: I don't mean they're heavy in the same sense as a doom band are heavy, all huge amounts of gain and gut wrenching roaring, but rather that the general vibe and intensity behind the music will (if given a fair chance) utterly floor you, and it's this that makes them so special. Their music is the very essence of barely restrained intent. Abrasive rather than aggressive, provoking rather than punishing... They could rip your head off and shit down your neck if they wanted to... but that's not what they're trying to achieve, it'll cause notably more problems if they simply almost sever your neck and then leave you laying there trying to put yourself back together.

When I first received 'Easter' on pre-order a week ago I played it simultaneously filled with huge anticipation and great trepidation... I knew it was going to be brilliant, but would it match up to their previous full length effort 'Oxeneers: Or The Lion Sleeps When His Antelope Go Home'? On first listen, I honestly thought it didn't. It was another fine example of their ability to craft intricate and intensely intelligent songs but where were the stand out tracks? Every TAAS release up to date has had that ONE song that simply blows you away. 'Oxeneers...' had 'Your Pearly Whites', 'This Is Meant To Hurt You' had 'Drinking From The Necks Of The Ones You Love' but these seemed to be lacking and my initial enjoyment suffered as a result.

'Easter' takes the already stupidly high standards set by 'Oxeneers...' and frankly, laughs at them whilst pushing the bar even further beyond the reach of other bands.

The reason there are no stand out tracks on this cd is because they ALL stand out. From start to finish there isn't a superfluous note or wasted idea. The album takes the established, near-tech Seattle sound of their previous releases but shapes it into a far more complete, and therefore complex, whole. The electronic elements of their sound have finally been fully incorporated into the song writing and the guitar work is simply phenomenal, somehow blending rocked-up Botch-esque tech with delicate indie sensitivity and at times a new, almost country-like swagger. On top of the musical progression, singer/madprophet/bornagainJohnnyRotten Steve Snere continues to allow his punky, but never unnecessarily aggressive delivery chase you around the musical landscape as his lyrics continue to tease and provoke, refusing to lay it on the line unless he absolutely has to. You know he's saying something important but he'll make you sweat to earn that understanding, if it ever comes at all and yet i dare anyone to try losing interest in his performance.

All of this sinks in somewhere around the fifth or sixth spin of the album and then you suddenly realise... actually, there ARE stand out tracks... and there's more than one! 'Subtle Body', 'Abracadabraca', the two-parts-of-the-same-song 'Perpetual Bris' and 'Corporeal' and album closer 'Crazy Woman Dirty Train' all, for different reasons bore slowly into your heart, oh so very quietly, over the space of the first few listens before finally exploding into bloom, gripping you completely. Indeed, 'Crazy Woman...' is perhaps the perfect example of this new enlivened TAAS sound as it slowly builds into what will obviously be a gigantic, tumultuous album finale only to refuse to do so at the very last second. Guitar, Bass, Drums, Samples and Vocals all rage into it but there is still restraint as the band refuse to take the easy option and give you what you want, or even what they want as you can almost feel the tension as they hold it back to where it's supposed to be. This album isn't supposed to be Botch, remember? and TAAS will only let their music happen on their own terms.

Thought provoking, genuinely original and searingly visceral, 'Easter' serves up the goods as only TAAS could. Frankly, I pity any band trying to move within similar circles at the moment as if this is what they're capable of after only a few years I am quite seriously scared to see where they will go next.

Forums - - These Arms Are Snakes - Easter