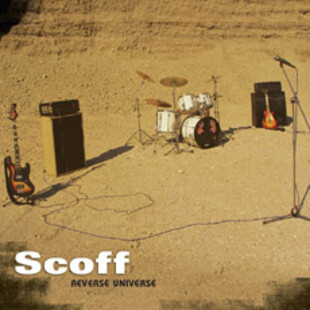 Warning. Reviewer in judging book by it's cover alert!

If I came across this album whilst CD shopping it would most likely be considered for an impromptu purchase. The cover showing as it does a drums, amps, guitars set-up in what appears to be some kind of desert-like background. To be fair it's most likely a quarry in Germany somewhere but, you can understand the point. A quick browse through the lyrics throws up enough Oh Yeahs and Ah Yeahs to suggest that some good groovy stoner fare is to be had inside this little plastic case. Song titles like 'Atacama', 'Stone Breed' and 'Luna' would most likely settle it and I'd be parting with my cash.

The initial disappointment probably wouldn't kick in until after the three minute intro and the opening riffs of the second track. The intro is pretty impressive. Well structured and heavy crunching riffs drive along nicely with changes of pace and solid drumming. The second track 'Sickstill' kicks in with a groovy guitar part before suddenly turning into some kind of naff psuedo-grunge Metallica. Damn them. They tricked me.

A pattern quickly develops into the middle section of the album whereby the song opens with a promising groove-laden riff until the James Hetfield-lite vocals kick in and the not-quite-Nickleback-but-close MTV-rock harmonies start flowing. There are some moments of heavy rocking abandon. The instrumental intro and the vocal-less 'Atacama' are pretty cool. It's not that Scoff are Puddle of Mud or anything. They worlds better than that. But, the sense that there's an eye on the air-play is almost tangible. Now that in itself is no crime but, it's not really what I'm looking for in a band. Doubtless lots of people will like Scoff. Indeed it would seem that Sony, Becks, MTV, Paramont Pictures and Adidas all find their tunes just dandy having chosen to use them in various promotional activities. Just not for me though.