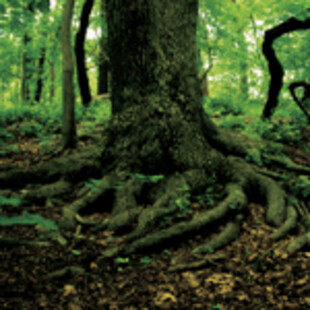 I first heard about Bossk when, shortly after buying Symmetry's rather cracking four track e.p. 'This Is Not The End, It Is A Beginning, You Cannot Falter Now', they announced that they would be touring with Symmetry. At the time (and this is in fact still the case) they only had an excerpt from the opening of the first track of this cd which didn't really give any real indication of their style but when the album was released I bought it on a whim anyway, figuring if they were touring with Symmetry they couldn't be too bad.

Clocking in at around the forty minute mark this two track album is a fantastic example of the new wave of British bands finding their own niche in the post-Isis world we all now inhabit (and yes I know that should be post-Neurosis but let's be honest, Isis are the band that made everyone notice).

Whilst the primary influence on this band is clearly Isis' 'Panopticon', Bossk are very much in line with their British contemporaries (of which Symmetry themselves are another fine example) in that the feel of the music itself is notably more positive and uplifting and the general sense of depression that is arguably so imbued in Isis and Neurosis' releases is left behind.

Track one, cleverly entitled 'I' starts very gently with an almost ambient-drone-like, soft feedback before moving slowly into more heavier fare. The main emphasis here is on the dynamics of the music and the interplay within each song between (cliche attack!) light and dark (i.e. light and heavy). The song revolves around itself wonderfully before reaching a crushing final high point before returning to its quiet origins at a full sixteen minutes and six seconds. Certainly, Bossk are a band that require a lot of space to be enjoyed seriously, you'd need to go back to your grindcore if you were only looking to fill a few minutes...

The equally geniusly named 'II' is a more sombre track, rolling in at a verging on ridiculous nineteen minutes and twenty seven seconds. Don't think for a second, however, that the boys are being self indulgent here as the opening takes up a delicate and mesmerising seven minutes before they get down to business and a straight ahead metal riff crashes in, chugging along in a fine impression of Isis' 'Oceanic' album, building more and more before a brief hiatus to alleviate any possibility of boredom. As the heavy kicks back in, the listener is treated to a rather unexpected vocal accompaniment (well I certainly wasn't expecting it after a good thirty minutes of instrumentalism) which, whilst completing the music and adding that final level that may have hampered an entirely instrumental band) is perhaps a little too gruff for it's own good. This is not to infer that it doesn't fit, it does, but rather that perhaps amidst such well thought out, intelligent writing a slightly subtler, less formulaic delivery may have worked better.

The sound throughout the recording is excellent and it warms my heart to see so many new bands making an effort to make their music sound right rather than just 'getting it done', although the guitars perhaps sound a little too rounded at times which possibly looses some of their edge. I'm sure live this is not a problem but a tiny little extra bite might well have finished off an otherwise excellent job. This plus the fact that one or two of the very quiet moments are almost lost entirely where the volume drops so far down are the only real complaints that can be levelled at the production and as I said, are far from major quibbles.

Final thoughts: Buy it. If you're remotely interested in this kind of music you'll like this band. I for one will certainly be keeping a close eye on them on the strength of this recording.