Alumbrados A Generation Of Vipers 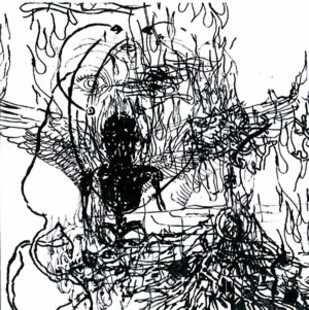 My attention was initially drawn to Alumbrados because of their connection to Bardo Pond. The band features two Bardo Pond mainstays in the form of guitarists John and Michael Gibbon. To complete the line up, the two brothers are joined by Michael Zanghi and Aaron Igler who contribute additional electronics and percussion.

There are definitely parallels to be drawn between Alumbrados and Bardo Pond, in so much that both bands play dreamy, sprawling psychedelic music. Whilst such a comparison is definitely fitting, it would also be lazy, as Alumbrados do differ from their parent band on a number of counts. Unlike Bardo Pond, Alumbrados offer up purely instrumental music that explores drone based sounds.

The band employ a vast array of traditional and ethnic instruments to create subtle, ever shifting landscapes of drones that flow seamlessly into each other. These sprawling soundscapes are punctuated by delicate percussion that blends with the music in such a way that it never once threatens to overwhelm or shatter the overall mood.

There's a contemplative, almost spiritual atmosphere to the tones that Alumbrados coax from their instruments and as such, the resulting music is dense without ever being oppressive. Listening to Alumbrados is like being enveloped by a slowly rising tide. Water lapping at your feet, gradually working its way inland, until eventually, your entire body is completely immersed in calm tranquil waters.

The sheer amount of textural detail present within each composition says a great deal about the level of care and attention that's been lavished on this album. As a whole, the record retains the feeling of an elaborate jam session without ever loosing its sense of direction or dynamics. It's a quality so often lacking in drone and experimental music and one that sets the album apart from many others of the same ilk.

This is the kind of record that can be appreciated on many levels. It acts beautifully as a non-intrusive soundtrack to a lazy Sunday afternoon but by the same token, it's something to completely lose yourself in, something that deserves to be listened to with your full undivided attention.

Forums - - Alumbrados - A Generation Of Vipers