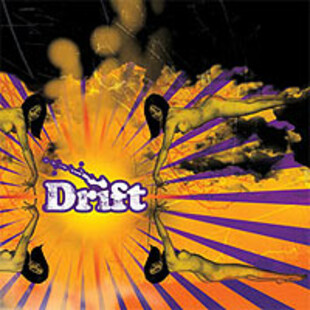 Drift hail from America, have never toured the UK, and are barely known in their own neck of the woods. Yet this, their self titled album debut, has been released on burgeoning English label Gallipoli. Boy, they've got a good set of ears on them at that label - and a great ethic - quality of sound rather than commercial value being the obvious blueprint from which they operate. So before I heap praise on this album (and after many a listen, I can guarantee I will), a big well done, and thank you, to all at Gallipoli for helping bring Drift to our ears.

The album begins magnificently - 'TB' setting the standard from the off. It's a mix of stoner rock and late grunge - think of a straight-up rock, moog-less Spritual Beggars perhaps. The song is perfectly abetted by frontman Joe Shipton raspy-yet-powerful vocals. Follow up 'Brushogg' is even better - the singing becomes harsher, yet maintaining their strength, and the track revolves around a brilliantly huge riff hook. It'll end up on all your cool compilations, let me tell you.

The album maintains a great balance. 'Broker' emphasises the grunge element - cleaner vocals sounding almost Vedder-esque - without feeling dated, mainly due to the heavier element the song breaks into during the chorus. And then after that comes 'Chiromancer', a raucous angry blast of heavy rock with a spat-out chorus you wouldn't want to be the intended target of. The album continues in a similar vein - the more relaxed followed by the aggressive, but the emerging pattern doesn't detract in any way from the quality - probably just a case of over-analysis from myself after listening to the album too much.

To cut short my ramblings, this is a really good album. Despite my claims earlier, this is essentially a good straight up stoner rock record, but without the cliches. The grunge element is there, but it isn't overtly of the genre - there's as much from the post-hardcore sound in here. It's the clean vocals you see - you hear band after band of gruff vocalled doomy stoner bands (for better or for worse) and then you get this quality, married to excellent, solid songs and it kind of stands out. Which is as good a compliment as I can pay I suppose.