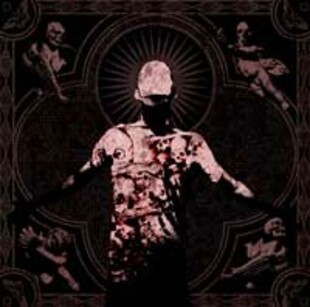 Who needs singers? Prancing about stages the world over, tossing their proverbial orb about like they're God's gift to microphones... "Bollocks to that!" is the almighty war cry this towering split CD (the first non-vinyl release by burgeoning Sheffield label Calculon Records) issues to us all. Take heed, readers.

Nottingham's very own Legion Of Doom (possibly the most straightforwardly metal band name ever conceived) open proceedings with the delightfully titled 'Brown For John'. This insistent fury of riffage drills its merry way into your skull right from the off, bringing to mind the monstrous likes of Mastodon and Keelhaul. The musicianship (and the production) on display is second-to-none, especially when the pummeling stops and the more thoughtful passages enter your ears - not once do you expect to hear a croon or a roar throughout 'Manifesto The First' or ahem, 'Tennis Bastard'. And with shredding like this on offer, why would you want to?

Mothertrucker might sound like a revved-up Fu Manchu songtitle, but this Birmingham quartet promise nothing of the sort - this is thick, lumpen, doom-laden steel of the heaviest order. The first of their offerings, 'Creeping Leffe', does just that - a quirky, QOTSA-esque riff slowly builds over a solid beat before dropping several tons of metal on to your poor, unsuspecting head. They then repeat the process before collapsing into a filthy riot of brain-molesting feedback. 'Smooth Vulture' looms for even longer, psychedelic waves of effects-drenched guitars swoop and dive over an ominous tom pattern, leading up to another unusual riff onslaught. The production isn't quite as sharp as Legion of Doom's contribution, but it suits the weight of their sound to a tee - it sounds as though Electric Wizard are playing above the studio and all efforts are being made to drown them out. Heavy.

This CD is a mighty fine example of how the underground can surprise you - the instru-metal revolution might leave several hundred vocalists kicking their heels, but when it sounds this good, fuck 'em!