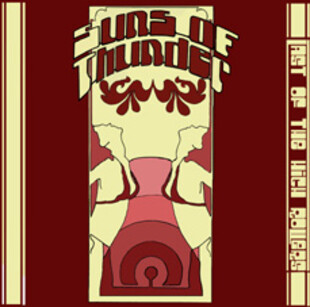 After a good two years worth of struggling with line up changes, mastering and remastering the album only to then remaster it again and so on and so forth, finally 'The Last of the High Rollers' sees the light of day.

The launch is looking good as there are already a few people there when I turn up at 8 to meet Shell who's working the door tonight. After a slow start the door seriously picks up and it's awesome to see that after the Suns have been away for so long they can still pull serious numbers on the door at £3 a head.

Jecano open up and show us what they're made of. Unfortunately, it appears they're no longer made of any of the really good stuff they used to be. I was given a copy of the 3 track EP these London boys released about 2 years ago now and thought it was brilliant, massive grooves, heavy as you like with some frankly impeccable guitar work and when they played Swansea early last year to a very appreciative crowd I was again much impressed. Something unpleasant, however, appears to have happened in the mean time as tonight we're presented with a sub-standard Clutch clone trying to use gain and a slightly more shouty singer to compensate for the fact that they aren't, in fact, Clutch after all. This is not to say they were rubbish, far from it, the musicianship was as exceptional as I was expecting with driving grooves aplenty. The set opener was impressive enough and the last song (predictably from the old EP...) is an absolute belter culminating in a sludgerriffic two minute jam which is easily the best part of their set. It's such a shame for such promise to be wasted on lazy plaguarism though, the second song of their set in particular being almost note perfect to Clutch's '(In The Wake of) The Swollen Goat'. Well presented definately but really must try harder.

Now I haven't seen the Suns of Thunder in nearly a year now between me being poor/lazy and them playing once in a blue moon so personally I'm seriously looking forward to this although I'm also slightly worried by the fact that because they play so rarely at the moment it might show a little. Add to that the possibly disasterous confusion that could arise from the use of dual-drummers throughout the set as Jake (original SoT drummer, now of Hondo Mclean) joins them for old times sake as additional drums backline.

The boys start slowly and they do appear slightly rusty and yes, sure enough, within minutes the two drummers appear to be confusing each other but the love Swansea has for these songs immediately stops worry in it's tracks and the crowd welcome these old friends back into their lives with a warm smile. Within the first song and a half the two drummers have got this synchronisation lark sorted and the rest of the band can relax into what they do best: putting the 'rock' back into 'stoner rock'. There appears to be a real trend in a lot of 'stoner' bands nowadays to shy away from the full-on balls out approach (Jecano again seem stuck in this trap to some extent) whereas the Suns have never been afraid to put their money where their mouths are and kick out the preverbial jams as only God himself intended. Swaggering comfortably through the material they're here to promote (and frankly they fucking well should do considering how long these songs have been around now...) the boys are having lots of fun tonight and I honestly don't think I've seen them quite as on form as they are tonight, which is praise indeed considering the Suns really don't do bad gigs. Clearly my belief that they were 'killing time' was deeply misfounded and they've been very active behind closed doors getting themselves ready. The keyboards are now a fully incorporated part of the soundscape and Adam and Greg's guitar work continues to improve (Adam especially continues to astound me at how phenomonoly talented he is) and the interplay between them is also more cohesive than ever before as the one works with, rather than just around the other.

After what feels like a joyous lifetime of groooooooooooooooooooves the night reaches it climax in the shape of 'Under The Control Of Time Part II' and the lads are joined on stage by the oh so very lovely Maria to add her 'wailing pipes of doom' (as described in the liner notes) to this doom tinged tripout behemoth. Now the boys normally play this as an instrumental and it's damn good then but I've also seen this done in it's true form (ie with Maria) once before and it blew my tiny little mind but tonight it's simply on a different level and the entire audience is lost in the void for well over fifteen minutes of feedback and effects drenched glory as Maria does her very best impression of Bjork getting saucy with Electric Wizard, dazzling from start to finish.

The lights go up and everyone in the room is screaming the word 'more' at the top of their lungs but Adam's managed to knacker one of his cables and they've already played for plenty long enough so no-one really grumbles when there's no encore and realistically I don't think they could've topped '...Time part II' anyway.

So the evening is over and I amble home for a quick smoke and then bed and whilst (if I'm honest) this may well be what I do most nights I think after the show tonight I may never quite be the same person again...