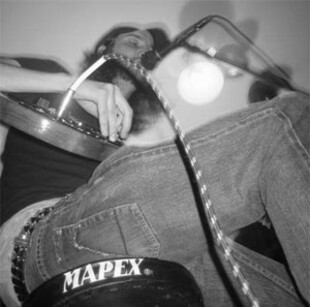 Having been blown away by Tim's solo set in a cramped Sheffield living room, I was very excited about this album. However, I was also very very drunk. So it was with some trepidation that I first put this cd on in the sober light of day, hoping that my earlier enthusiasm hadn't been entirely fuelled by beer. Thankfully, my drunken taste is better than I give it credit for. 'Found Dead on the Shoreline', Tim Holehouse's first solo record, contains some of most intense and beautiful songs I've heard in a long while.

This collection of songs has been in gestation since 1998, only coming to the stage where Tim felt happy enough to record them last year. Avid ninehertz readers may be more familiar with Tim through his bands Among the Missing and Naked Shit; 'Found Dead...' is an entirely different affair. Gone are the ferocious sludge and corpse paint, leaving just Tim and his guitar. This is an intensely emotional record, at times very sparse and stark, even solemn in places, such as on the opening track 'Broken Down upon a Lost Highway'. At other times it is more melodic, coming across like a darker, less poppy and 'indie' Elliott Smith.

There are also some more folky elements, in 'Verse' especially, which in its intense, almost growled, chorus reminds me of the moments of genius on the PJ Harvey and John Parish collaboration 'Dancehall at Louse Point'. Elsewhere there are signs of Tim's love of indie rock, notably on 'In the Face of Adversity', which especially when the drums kick in, makes me think of 'In Utero' era Nirvana.

As Tim writes in the sleeve notes, the themes running through this record are "love, loss, death, and boats". While the first three are present throughout, it is in the last two tracks, 'Vessels that Sail in the Night' and 'Ocean Fare', that the boats element makes its presence felt, albeit as metaphors for the other themes. While in lesser hands the "Ships that sail in the night" analogies could seem a little obvious, even cheesy, here they are redeemed by the stark beauty of the vocals and guitar on 'Vessels...' and ' by the magnificent building intensity of 'Ocean Fare'.

'Found Dead...' may not be your usual ninehertz fodder, but sometimes (well, mostly in my case) you want to listen to something a bit different - with 'proper' singing and that. In all seriousness, these seven songs combine to make a beautiful album, one that I think even the most hardened stoner/sludge/doom fan could appreciate, let hope it's not another seven years until Tim makes the next one.