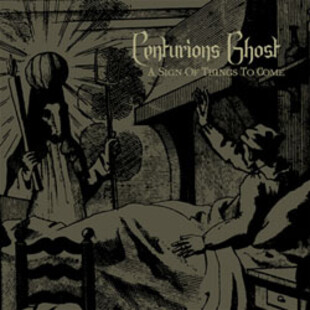 On paper, before I'd heard the music of Centurions Ghost, I didn't think they'd be a band for me. A proposed infusion of doom, death and black metal with 'traditional' metal values has potential to be exciting, sure. But witnessing several bands of late pompously claiming 'trueness' by ignoring the last twenty years of metal music merely to shield the fact that sound tired and unoriginal tends to make one sceptical.

Yet, lo and behold, I have to say it would be an understatement to call my first listen to 'A Sign of Things to Come' a pleasant surprise. It kicks off magnificently, with 'Devils Disciple', a monstrous track with a glorious main riff; its doom core increased in tempo with hints of Entombed or even At the Gates death/thrash.

Elsewhere, such as on 'Requiem for the Haunted Heart' the pace is slowed to a more traditional doom pace, with the riff-dominant dirges sounding superb. Throughout there's hints of Cathedral and the original black metallers Venom, but mixed with differing extreme metal elements. As promised, I suppose, but it shatters my unfair scepticism by sounding unique through not only its blend of influences, but also its direction and its power.

Released on the burgeoning Swedish label I Hate (home of Thee Plague of Gentlemen) and with nice production and a suitably morose, ethereal aura across the seven tracks, then if this truly is 'A Sign of Things to Come', then Centurions Ghost have laid down a fantastic marker. It is such an accomplished album that you'd swear you're listening to a European doom mainstay's career defining album rather than an English band's debut, if you didn't know better.

Forums - - Centurions Ghost - A Sign Of Things To Come