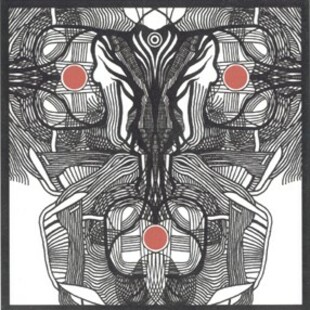 For their 3rd record Shora have done a bit of a stylistic about turn. Gone is the chaotic noisecore of their past, which has now given way to darkly epic instrumental post rock. It would be all too easy to compare Shora to bands like Isis or Pelican, but I'd be doing them a grave injustice if I simply wrote them off as yet another Isis clone. I'll admit that the above bands certainly serve as valid reference points, but with 'Maval' Shora have delivered a record that has enough in terms of sheer originality to set them apart from the crowd.

The key difference here is that Shora eschew the typical quiet/loud dynamic for a more understated slow burning approach, one that has far more in common with 70s krautrock than it does with today's post rock. This isn't something that's immediately apparent, but listen to the whole album in one sitting and I think you'll see what I'm getting at.

Shora craft their purely instrumental music with a suitably wide sonic palette, employing both traditional instruments and electronics. The sheer attention to detail and texture on this record is nothing short of stunning. Dual guitar lines lay down a web of tightly interwoven melodies that continuously evolve and shift, keeping the listener in an almost hypnotic state throughout. The bass lines are fluid and dense with just the right amount of grit to cut through. The keyboards are used sparingly and add an ethereal sheen to the proceedings. This is all underpinned by a rhythm section that not only drives the whole thing forward but also adds a significant level of interest.

Their drummer employs a highly rhythmic and busy style that manages to strike a successful balance between simple rhythmic repetition and more complex patterns. It's been a while since I've heard a drummer play to this level, both in terms of creativity and ability, but it's bloody great. It's all these little intricacies that really score the band points. I found myself enjoying this record far more than say, the latest Pelican album, because musically, it has so much more going on.

The overall effect is like being wrapped up in a warm patchwork quilt of sound. 'Malval' never really builds up to anything approaching crushingly heavy but by refusing to adhere to the 'wall of sound' idiom, they come off sounding far more individual as a band. The end result is a darkly dense, complex and moving record that holds up to many repeat listens.

With 'Malval', Shora have delivered a record that should be heard by everyone with more than a passing interest in good music. If you enjoy bands like Isis, Neurosis and Red Sparowes you'd be an absolute fool to let this one pass you by.