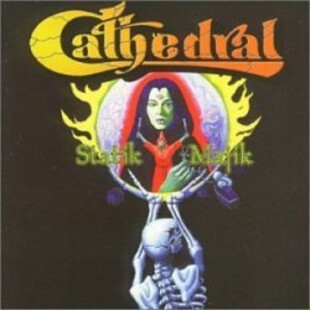 Back in 1992, UK doom legends Cathedral put out a little four-song EP, known as 'Soul Sacrifice'. A while later, in 1994, they put out another, called 'Statik Majik'. Five years later, Earache kindly decided to repackage both of these EPs onto on CD, thereby making for my favourite Cathedral platter ever.

Starting with the 'Soul Sacrifice' EP first. After the dirge-like bleakness of the seminal 'Forest of Equilibrium' debut album, still considered a landmark by many doom fans today, Cathedral listeners must have got quite a surprise when they wrapped their ears around these four tracks. Only the Gothic, slow plod of 'Frozen Rapture' bears any real resemblance of the band's previous release, being a trudging lament with a bleak, bleak riff that worms inside your head and stays there, exuding cold, icy power and atmosphere throughout. The other three tracks are more uptempo and groovy and point to the direction Cathedral would take over the next few years. 'Soul Sacrifice' is a reworking of a 'Forest of Equilibrium' song, but doubled in both length and groove, making for a more accessible listen. The general ambience of this and the other two remaining tracks highlight the growing influence of 1970s heavy rock on the band's music, and while it probably cost them some fans, I'm willing to bet it also gained them a lot more as well. Bands are meant to change and progress. If Cathedral had just remade 'Forest...' then, according to vocalist Lee Dorrian, they'd have been pigeonholing themselves already, and making music that wasn't sincere to them.

But back to the songs. 'Autumn Twilight' is up next, and it's an utter Cathedral classic, in the top five songs they've ever done for me. You can't help but hum and tap your foot to this set of riffs, and the track does seem to exude a lovely, slightly dark, autumnal atmosphere. One of the best doom songs ever, in my opinion. The aforementioned 'Frozen Rapture' then comes and slows things down a bit, but then the tempos are speeded up again with 'Golden Blood [Flooding]' with its groovy intro riff and flowing hard rock solos. The song never quite lives up to its amazing intro, and goes on a bit long at 8 minutes, but it rounds off the EP nicely.

As indicators of how Cathedral transitioned from album to album, these EPs are useful things. Fast forward to 1994, and the 'Statik Majik' EP was released. Still bearing plenty-if not more-of the traces of weirdness and quirkiness that characterised the album before it, 'The Ethereal Mirror', it remains as perhaps Cathedral's most individual release. There were several versions of this EP made, with the first track usually being the difference, however on the reissue the tracklisting is different again, with an 'Ethereal Mirror' song, 'Midnight Mountain', starting things off. This song should need no introduction because it's an awesome Cathedral classic with a shedload of grooves and riffs all over the place, so I'll move on to the next three songs, which aren't really like anything the band had done before.

'Hypnos 164' has a 40-second feedback intro, and then a weird, weird rocking bit with unusual dynamics and what I think are either bells or tambourines used at regular intervals. It took me a while to get used to this bit, but I grew to love it eventually. What really makes this song though is the riff that's repeated several times at the end, which will stick in your mind for DAYS, it's utterly addictive. Also of note are the lyrics, seemingly about Man's unnatural overruling of Nature.

Cosmic Funeral is yet another classic song, and you only really need to listen once to find out why. A slow, doomy first half and then more groovy rifferama in the second. This song rules so much I just can't find words to describe it, save that after a couple of spins of it you'll soon be shouting "Let's groove-SONIC MOTHERFUCKER!!!!!!!!!!" at the top of your voice.

What really makes this EP stand out, though, is the final track, the 23-minute 'Voyage of the Homeless Sapien', which until recently was the band's longest ever song. Part of the reason for this being on the EP, I think [though I'm not sure], was that it is essentially a massive "fuck you" to Columbia records, whom the band were dealing with at the time [as part of a deal between Columbia and Earache]. The label didn't want the song to be on the EP, but the band insisted, and won the day. The actual song is insane, a multi-part epic that veers from pastoral folk to slow, heavy doom to all-out heavy metal to weird voices bits and back to folk again via several more detours into weirdness. Despite it's length, it's perfectly listenable, thanks to its odd, multi-part structuring and the sheer contrast of styles presented, which ensures it never gets boring. Heck, one of the band's best ever riffs is hidden away inside this song [I'll leave you to judge where]. A glorious headfuck of a listen.

In my opinion, this is probably the best and most rewarding Cathedral release because it manages to show most, if not all, sides of the band, and features some of my favourite riffs ever. A few songs might take some getting into, but don't be scared away by it because it's unconventional, for this is the very thing that makes it brilliant. Essential listening for anyone into Cathedral or interesting heavy music.