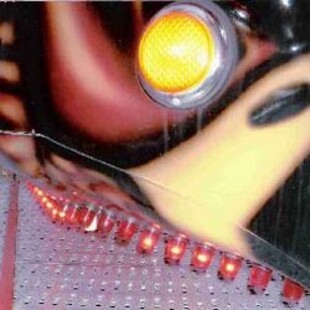 This is a weird one. Blackloud appears to be the result of the inner workings of a self-amusing, eclectic, possibly drug-addled mind - belonging to former Small Axe member Jimbo Burton. '6th 6th 6th' is one of the strangest records you'll hear all year, that's for sure. A whole vast array of instruments appears to have been utilised by the man, and recording tricks cut into the music to fuck with the listeners head at every possible moment. Choruses contain a mosaic of different recordings, often in the same line so that every word appears to have been taped individually and then cut and pasted back together, like a serial killer's ransom note clipped from various newspapers. Big dirty bass lines rumble along, clashing with smoother synthesised effects, while a thesaurus of rhymes sits on top.

To try and describe the music is a hard task. Despite the fact that there are a few moments where the oddball nature of the creation detracts from the ability to enjoy it for what it is, there are even more moments where you are utterly compelled, amused, enthralled. Bass Heavy Acidic Pop Rock 'n' Roll Sci-Fi - that's the self-description provided by the website, and ambiguous as it is, it's as close as you can possibly get to accurate description. If you can imagine Ween with a psychedelic heart and industrial tinge, producing the soundtrack to some creepy horror film, then that might give you an idea...but probably not.

The beginning of the album, particularly after the first few listens (which are given over to "What the hell?" confusion) wilts slightly under the weight of its own bizarreness. The first couple of tracks come across like the more experimental early-Marilyn Manson output crossed with the background wails of a Rob Zombie film - and feel like a forced 'wackiness' rather than a musically compelling strangeness. And just as you're feeling that this can be put away, thinking that it's just too odd for any sustained enjoyment, things take a turn for the better. The album, at a stroke, becomes distinctly darker, the zaniness of the start replaced by a disturbing psychotic menace. 'Artificial Light' exudes an eeriness that is ably backed up by a slow, dark rhythm that brings to mind an evil version of indie band Swell.

'Deep Clean' plunges the depths further - with vocals that sound like they were sung at the bottom of a well - and one full with water at that - the result sounding like an actor's deepened, strained voice as the film is slowed down for dramatic effect. Later, the increasing use of keyboards and synthesisers becomes apparent, and it adds to the whole feel of the work in a manner which Trent Reznor would be proud. The album evolves further - 'Formation', possibly the overall highlight of '6th 6th 6th', cuts together and overlaps many edits of Burton's voice - sung, screamed, spoken (giving the impression he's arguing with himself), over a simple synth line, which builds in a grand industrial manner.

There's more to keep you enthralled as well. There's the great, minimal piano line not unlike that at the end of Nine Inch Nails' 'Closer' on 'Scrubble Dubbed', which is otherwise dominated by slightly childish, but quite funny lines of rhyming words rapped speedily, or the dirty big bass line running throughout 'Black Ball' - all accompanied by Jimbo's distinctive drawl.

It's quite easy to write this off as the lo-fi musings of some deranged American that would appeal only to Mr. Bungle or Butthole Surfers fans. And while this maybe a large part of the truth, there's another level to '6th 6th 6th' - a warmth generated by it's psychedelic, industrial soul - that compels, addicts and ultimately brings you back to listen again and again.