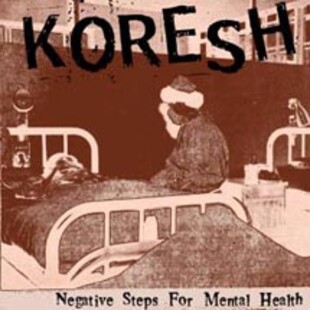 It's like that cliche about buses. Earth, Sunn 0))) and Khanate aren't renowned for their prolific output when it comes to albums, but then, recently, all three release records within a few weeks of each other. And naturally, a large section of the doom world has its eyes and ears fixed on the droning depths peddled by these three titans of extremity right now. Before you think I'm going to insinuate that Koresh are attempting to latch on to a wave, I should mention that 'Negative Steps for Mental Health' has been out for several months now. It is just that it is this mini-'climate', and with descriptions I have read of the band averaging out as 'evil doom', that I prepare to write this review.

My pre-conceptions don't exactly come to bear. True, there are dronish doom hints - the slow, restrained build up to the closing track being an example, but it's all mixed with a more classic doom groove and tempo, as well as a gritty hardcore edge. The grimy guitar sound is fantastic, and with vocals that sound someway between Johnny Morrow and some black metal 'singer', there is an evil mood to proceedings, thankfully not taken seriously (beyond the musical effect) if the humorous inlay is anything to go by. And any fears of pretentious music-as-art pondering goings on can be dispelled by the fact that opening track, 'Deathcamp Manager', is less than three and a half minutes long!

The first track is a blinder - opening with distortion and drum crashes, before hitting a nice rolling riff, its 'chorus' with added screamed vocals sounding great as the music breaks and fluctuates. 'Cocaine Samurai' is a much slower affair - the guitar crawling along with whispered vocals, only sporadically increasing the volume. It all settles down again, and goes to near acoustic guitar lines... and then it stops completely, only to re-appear moments later in full force, riff heavy and instrumental, until it violently repeats the process near the end of it's ten minute length, this time with volume seemingly increased and with full-blooded vocal input. Brilliant.

An extremely entertaining demo then - the only problem is that it's tantalisingly too short - two songs and just over 13 minutes - but then there's always the repeat button, and of course, the live setting.