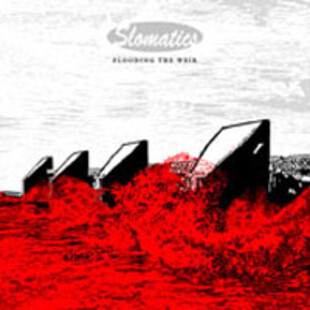 I'm getting a little soft in my old age. Now whenever our esteemed editor Pete wants me to review something, the conversation usually goes something like this:

"Gareth, how about reviewing [random band]?"

At which point I usually take the CD like the fool I am. Most of the time, the CD in question sounds cock all like any of the bands above and I end up having to come up with constructive comments about a niche genre I know nothing about, or worse, end up listening to a lot of saxophone. Bastard.

And he's done it again, although his case was helped this time by the albums pretty cover. Although for once, he wasn't lying. All of the above would be a good reference point for Slomatics heavy, painfully slow brand of metal. They even score extra points thanks to my ignorance, as even as I'm sure there are several bands that have a very similar sound, I haven't heard them so as far as I'm concerned this is all experimental and new. And we all know by now how much I like that sort of thing.

'Flooding the Weir' is a mostly instrumental, very atmospheric record, and as stated before, it's very slow for the most part. Not as slow as other bands such as Vat of Fat, who almost reduced me to tears waiting for the next note when they played a recent Sheffield show, but we're entering a place where 110 beats per minute would be probably be classed as 'jaunty.' There's always a danger of losing the listeners interest when playing such music, but this album manages to throw in enough good riffs and rhythms to keep itself going. And I never thought I'd say this, but the album could have done with a little more vocals, as when they're used, they're used very well and help break up the relentless flow of sludge.

As much as I liked the sound, a full albums worth was a little much for me. There wasn't a massive amount of variety throughout the 6 tracks, and I found my attention wandering at a couple of points, particularly at third track 'The Technique'. Still, the album was a very enjoyable listening experience for the most part, and while not as good as Pelican's newest record, it comes impressively close for a debut release from this Irish trio. If they can introduce and develop more ideas without losing their sound, their next release might be a below the radar classic. Ones to watch for sure.