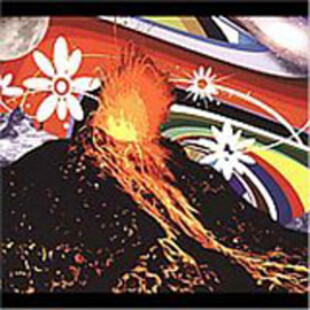 This release has been somewhat of a revelation for me. Having never been a fan of Floor (Steve Brooks and Juan Montoya formerly of Floor are two of the four members) I was surprised to find myself with a real urge to pick this up. If I had to pin it down I'd say it could most likely have been the stunning artwork that drew me in.

I had read certain snippets about the album (all good) and the general idea seemed to be that this was a great progression for the collective members and a prime example of stoner/rock/whatever with a fresh spin on things. I placed the order and waited......

Now I don't wanna generalise but stoner/doom etc. tends to be on the long side when it comes to track length so, I was kinda surprised when I popped this in the CD player and 10 tracks/29:46 mins shows on the display. I was expecting epic as in long and vast but what I got was epic as in heroic and certainly impressive.

First track 'Charge of the Brown Recluse' is apparantly not about what you would think. It's a slow slightly droning start with some repetative riffing, good giutar breaks and a certain familiarity about the vocals that's difficult to place.

Once second track 'Safe' kicks in the album is really starting. There's frantic drumming and things are knocked up a notch pace wise. The vocals now clearly remind you of a little known band called Quicksand (anyone heard of them?). Before you can settle on a hook the tune is over.

This becomes a standard for the rest of the album. The first few listens and nothing really sticks in your mind. All but three of the tracks clock in at less than two minutes. But persevere and reap the rewards. This release has a whole host of great things crammed into it's brief running time. The first real point that grabs you will most likely be when eighth track 'Fire' kicks in. The riff is the closest thing I've heard to The Cure's 'She Sells Sanctury' (and that's a good thing right!) but doesn't actually share any of the chords.

I hesitate to suggest that this album along with Open Hand's 'You and Me' (similar in spirit if not sound) could be among the first of a new wave of "post"-stoner releases. I can sense moans and groans may come from the anti-label brigade but it's the best description I can muster and it fits perfectly. Band members with history and experience bringing new ideas and new sounds to a familiar genre has to be a good thing and tracks like 'Erase' and 'Fire' are storming pop-stoner with hooks that just can't be denied!

The production on Torche is just as epic as the material. The guitars have immediacy and crunch and there are lots of subtle little riffs and harmonies going on all over the place. In fact, it's almost like 10 good riffs in some of these songs isn't enough for these guys, they want to slot them into every available space. But, this is done superbly and never sounds too cluttered or annoying.

They muster equal parts melody and mood from start to finish and have produced something seriously impressive with this debut. I always maintain that "Rock" music in its many varieties is the only type of music that can really soar. This collection is more capable than most of proving that point.