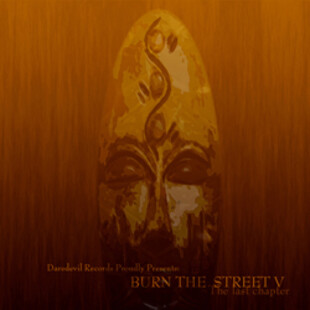 What have I let myself in for here? Two reviews by that elusive band 'Various' in a row...I won't be able to get away with any lazy compilation cliches here. Actually, to tell you the truth, this compilation and the one reviewed before go quite nicely together. 'Heaviosity' brings together unknown acts from the U.K. and the U.S. to great effect, while the latest chronicle of the 'Burn the Streets' series packs twenty-one lesser-known bands (mainly) from the European continent into one disk. It's no surprise that the excellent label Daredevil are behind this, seeing that they have been one of the cornerstones of European stoner rock for quite a while now, and with this being the last episode of the 'Burn the Streets' they've seen fit to give the whole thing over to lesser known bands that they feel deserve more exposure. As such, unless you have more than a slight interest in the (mainland) continent's stoner exports then the most familiar names will be those that possibly have been inspired by more illustrious U.S. stoner rock bands' songs - such as Ojo Rojo or Rickshaw.

Nationality-wise, unsurprisingly, it's Sweden, the home of many a brilliant stoner rock band throughout the years, and the label's native Germany that dominate. The Swedes take up a third of the album, and while The Awesome Machine and Generous Maria just may be names you recognise, the honours go elsewhere. Dear Mutant in particular impress, despite, or because of, the vocalist's exact imitation of John Garcia - the song, 'In Space', sounding powerful, and inevitably bringing to mind Unida. Taurus also grab the attention with their rock 'n' roll that's reminiscent of compatriots The Hellacopters or even a less cocksure The Hives. Elsewhere, Rickshaw open the proceedings with forceful stoner rock intent, but the when the vocals sound like they're being sung by Bruce Dickinson, it kind of puts off this reviewer a tad.

The German input, although a song less, is definitely stronger, and includes two of the albums greatest moments. Gutbucket provide the first of these with the brilliant 'Leave My Show'. Containing huge hooks and an unbelievable swagger, it comes across, surprisingly, like an indie band - The Kaiser Chiefs or The Killers say - who've relaxed the faux geek cool, cheered up and stuck Sabbath and the Rolling Stones on the record player. The other comes in the shape of the infectious 'Sublime' from Ojo Rojo, a brilliant riff-heavy song with a great chorus - almost like 'Pandemonium'-era Killing Joke gone stoner. Weird comparison, I know, but that's what springs to mind - whatever it is, let's just say - I like it a lot. Apart from these two, there's the beautiful Kyuss-like intro to Calamus' 'All Fear' that stands out, even though the rest of the song never really matches up with it's beginning, and Good Witch of the South provide a bit of variety with a faster punkier approach, without ever really exciting.

The only other country to contribute more than one band to the compilation is Italy, and as has become clear to me recently, it is proving to be a real hotbed for great, varied stoner rock. There's a hat-trick of superb songs here - from the only female vocals on the album on Alix's gorgeous 'Out of the Sighs', to T.H.U.M.B.'s trippy 'Wasted Words' from their fantastic 'Lunar Flight' EP, and rounded off with the should-be-huge Black Hole of Hulejra, whose 'Dust Mite' contains a glorious warm fuzz glow. The album does venture out of Europe on a couple of occasions - to Canada for C'mon, who apparently feature an ex-member of Nashville Pussy, and the result is what you'd expect, except with cleaner vocals that are actually sung, to the songs credit - and to Australia for Winterun, who sound very retro, with impressive Hendrix guitars, 70's rock vocals and guitar solos.

Elsewhere, Nightstalker, who are apparently huge in their native Greece, do an incredibly accurate impression of Dope to Infinity era Monster Magnet, vocals n' all, and therefore appear slightly pointless. France's Highlight provide 'Follow Your Compass', a neat little song that's impressive in an early Queens of the Stone Age manner, and Finland's Defuse sound like a stoner rock band being produced by a more metal minded producer which actually makes it stand out a little, but doesn't really do much in itself. One track sticks out a lot though from this grouping of nationalities marked 'Others' - that of Pinocchio Pinchball - and not only because of the bizarre name, or the fact that they come from Slovenia. The production sound isn't terrible, but it's definitely the weakest on the album (and actually highlights the fantastically high production level that is otherwise applied to this whole album) - but in a way it adds to the songs charm, especially as it opens up with a typical stoner riff that is so dirty that to make it any cleaner would be a crime. When the vocals come in, all dreamy like the great Dead Meadow, it's enchanting.

The fact that every track name is in English is damning, depressing proof that the power in the music industry is in North America. Many of us are probably guilty at times of looking across the Atlantic, rather than closer to home - to our listening pleasure's detriment. 'Burn the Streets V' may just be the perfect stepping stone to change that. Understandably, the quality is rather up and down across the mammoth 21 tracks, but more importantly, the peaks are positively Himalayan, and every person will find their own pots of gold.