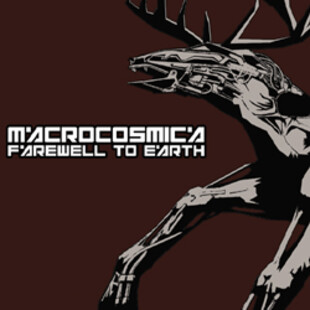 It's always strange to find out a band you love has a long lost former member floating around the music scene, looking for the right project to throw their weight behind. The Libertines had Johnny Borrell, currently polluting ears worldwide with the stream of unrelenting musical toss under the name of Razorlight. You aren't the second coming, you're a prick. Get your hair cut. 65daysofstatic had Gareth Hughes, about to bring the mosh to the masses with his new band The Darwin Theory*, album due November '05. And Mogwai had Brendan O'Hare, currently making big progressive noise with Macrocosmia.

For such an important album for Brendan, it's a little surprising it opens with 'Crater Style'. The first couple of minutes of the song are, in a word, dull. A slightly tired riff, topped off with some weak Hawkwind-esque vocals doesn't exactly grab the listener. It gets better about two minutes in, where it oddly sounds like a less awkward version of Oxford oiks Youthmovie Soundtrack Strategies. Then the pretty chords come in and the whole thing starts building up and by the end, it's clear that this has gone from sub-standard to high point of the album.

It would be incredibly lazy journalism to make the obvious Mogwai comparisons, so here I go. Yes, they are there, but there's a lot more going on than that. There are comparisons to be drawn to a lot of other bands, mainly within the alternative rock genre and a few outside too. 'The Casket', has an opening that reminds me of 'Goodbye Blue Sky', by the great Pink Floyd, but switches styles so much it would be pointless to list them all. There's also much more vocals here, carried off brilliantly and bringing a touch of 70's drug-rock to proceedings. Sections where Cerwyss, Brendan's sister, sing sound a little out of place, but we can let that slide because you can't argue with a pretty girl with a bass.

The band forge their own sound over the albums 47 minutes by taking the best bits from their CD collections without ever being derivative, and it's this quality that make the album such a stand out for me. Styles switch seamlessly and you're glad there's a band out there who are trying to do something different. As much as I enjoyed The Domes of Silence album, reviewed elsewhere, Macrocosmica do the whole eclectic thing much better. There are fewer styles throughout the album, but they are carried off with a competence that most bands can only dream of.

The production of the album is great, but you can't help think that an opportunity was missed to make the whole thing sound immense. The distorted guitar sound is slightly brittle in sections, and some of the heavier sections lack weight. Not layering the guitars gave the bass and drums a chance to be pushed forward more, and this sadly hasn't been done as well as it could have been. Still, there isn't anything wrong with the sound as such, and the album remains clear and listenable throughout with good separation on the instruments. Oddly enough, these complaints seem to apply to some songs more than others, as parts of 'Torch Number One', sound huge.

If it isn't obvious yet, 'Farewell to Earth', is easily the best thing I've been given to review for this fine, green site. With it's long, meandering sections verging on the pretentious, it's got my name written all over it, but even I was surprised at how good it was. Fans of Pelican and Isis etc will enjoy this if they can put aside any negative Mogwai associations. Easily one of the best alternative guitar albums produced by a UK band in a long time.