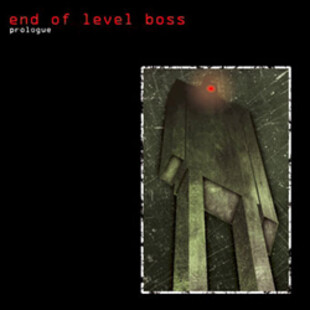 Harry Armstrong, Guinness drinker, and all round nice guy, is famous for fronting one of the UK's best ever stoner rock bands and personal favourites Hangnail, has put them on a permanent hiatus of late to create what he has named End Of Level Boss. Now if that isn't the best name ever for a band ever, I'll eat my copy of their album.

Kicking off with the trippy and e-bow infused 'Freak Waves' a live favourite and old flame, having appeared on their demo, it certainly hits the spot, coming off like a reinvigorated band who mean business.

'Disjointedhead' is the second track of this eight-track debut, and is also one that appeared on the demo. Its twisting liquid lead riff is mesmerizing, almost like Isis put through a crash course in desert rock in its staccato stabs, before giving way to a faster more rock and roll section. Harry's insistence that he can 'drink you under the table' should be taken seriously, the delivery just shines through in the bass-heavy and fuzzed production.

'Vivid' does a Ronseal (does exactly what it says on the tin) and shows off the band's ability to be as psychedelic as their diverse influences, Harry screaming 'what colour was the sky?' before the trademark bleeps and tweets from his trusty toy gun placed on guitar pickups ends the track in an abrupt yet lingering stasis.

Its interesting to see what has come out of the creative mind of Hangnail, good as they were on classic albums like 'Ten Days Before Summer' and 'Clouds In The Head', End Of Level Boss just seems more direct and full of intent, rather than the laid-back jam-room type efforts of the previous output.

The jamming does return for a brief segue in the delightfully named 'Nosepicker' where three minutes are taken up by a bluesy yet structured interlude, the layered solos and basslines provide a brief moment of reflection before the brilliant 'Step The Mind Gap' comes in with its sharp stabbing riffs and superbly delivered vocal lines.

Echoed vocals over a malicious sounding main riff signal the start of 'Spine Transfer' which shows off the guitar wizardry at work on this excellent release, time changes and thunderous drum crashes make this track an undeniable standout, the now trademark guitar sound that runs through this whole album is in effect, no note is left to hang before the next one is played which maintains interest and makes it sound unlike anything else out there in the UK metal or stoner scene today.

Before you know it, we're into the nearly nine-minute closer 'Leaving The Chemosphere' which has an amazing bass-scale-run riff running under its slow beat, with lyrics like 'Goodbye to your world' it feels like its defiantly influenced by the ideas that doom brings to music, a feeling of menace, you can imagine the band really going for it live to this song, the constant steam-roller effect of the riffs has a definite appeal.

Defiantly investigate if you are into hearing something new from a proved group of musicians, and equally if you have a penchant for driving riffs and truly innovative songwriting in your stoner rock. Catch them live at a venue near you soon!