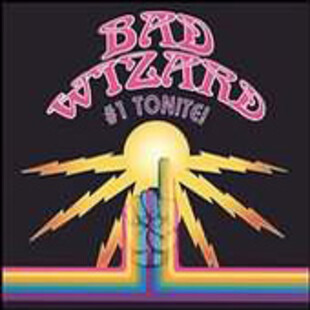 Yeah, baby! The party starts here. Bad Wizard are back with their third album, so dust down your air guitars, crack open a beer, pour yourself a whiskey, and pass round the blue cheese dip and nibbles (okay, maybe not the last one), because the rest of the night is dedicated to rocking out and having fun...

...Or so the theory goes. Unfortunately the reality isn't quite the same. They've got all the right ingredients in place with the MC5 and Thin Lizzy aping sound and the AC/DC dynamics, but there's not little to actually grab the attention, and the album tends to slip you by in the background. I should have realised earlier, I suppose - in my head I was looking forward to this release having enjoyed the bands first two albums ('Sophisticated Mouth' and 'Free And Easy'). But then after casting a more critical eye over this release than before (due to the review) and being disappointed with the results, I tried to think of how many times after the first week of purchasing the bands opening couplet I had listened to them. I struggled - in fact probably the only time they stopped gathering dust was when I moved house.

And so it is with '#! Tonite!' The initial rush created by the sound that has been untainted by anything to happen in the last 30 years is exhilarating...on first listen. Further listens become exponentially less exciting, until the point where you put the album back on the shelf, smile at the band's refusal to innovate and evolve, and leave it to take up space for an lengthy passage of time. Which is all well in good - unless you've paid £15 for the thing of course.

It isn't as bad as I make it sound - the title track is a brilliant, overblown dedication to touring the US, name checking several cities, in a manner that you could imagine Kiss would be proud. I'm sure there's many a party that could be vitalised by the energy and enthusiasm that bursts from the speakers. The problem is, without much to stand out, then surely just sticking 'Back in Black' on would create the same vibrancy with much better songs.

In all forms of rock and metal at the moment it appears bands are falling over themselves to sound like they come from the last decade or two. Whether it be The Darkness, Judas Priest reunions or Euro-power metal, it does appear to be in vogue. In that sense, maybe, with a bit of luck (or magic, arf), Bad Wizard could find themselves in a prosperous niche. Not that I think that they're being cynical - far from it - '#1 Tonite!' is purely for the band - rock 'n' roll is in their blood and that is what they shall play - if you don't like it then move along. It may have taken me some time, but I think I've finally learned the lesson.