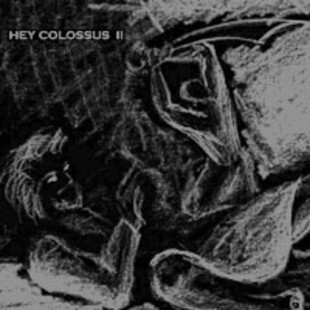 Hey Colossus blew me away with their first record 'Hey Colossus Hates You...' and I had high hopes for this, their second long player. The recent 7 inch split with the Phil Collins 3 boded well, with its almost Kyuss-ish groove and woofer threatening lowend rumble.

But with this record Hey Colossus have put the bar way higher - this is a challenging, multi-layered record which almost marks a departure from their earlier stoner sound. The elements which I most dug before are certainly all still present - enormous riffs, lurching changes and screamed, impassioned vocals - but here it's almost like the band are going for a 'Melvins meets Krautrock' type super-heavy repetitive mantra sound. This is most evident on opener 'Red Giant' which reminds me of 70's German freaks Neu or, if it's possible, Kraftwerk jamming along to Sabbath. Listening to this track inparticular it is easy to lose track of time, as the groove rumbles on and on - real head music! This theme crops up again in 'Take It' with it's Hawkwind-esque repetitive chants.

For all the trippy, robotic trance rock going on here the band haven't forgotten how to get wild and rock out, thankfully. The opening minute of 'Horsehead' is as full on as anything I've heard this year, and it's the balance between the 'trippier' (for want of a better word - to me the mark of a great record is when it's difficult to describe!) and more straight ahead rockin' that makes this such a great record.

As much as I dig generic stoner rock - and I'm not ashamed in any way to say so - it's the records which push the boundaries and incorporate other influences and sounds which I keep coming back to. This record most definitely falls into that category. Essential!