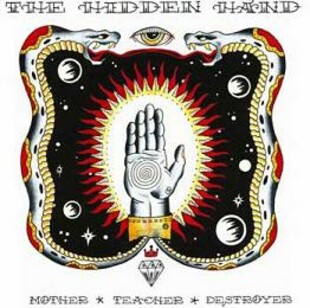 During his time in The Obsessed, Saint Vitus and Spirit Caravan, Wino has grown into a godfather figure in the eyes of the whole doom and stoner scene. Therefore, despite a slightly disappointing debut (Divine Propaganda), The Hidden Hand still demand our attention. So, Mother Teacher Destroyer arrives with a lot of expectation - many hoping to see the promise, that never fully flowered on the debut, realised - returning Wino to his rightful place at the top of the tree.

So, does it meet these expectations, these hopes? Happily, the answer is a resounding yes, and then some. Mother Teacher Destroyer is a glorious album that will be played for years to come. This is simply doom-rock at its very best - a perfect blend of doom, metal, stoner, blues, and even prog and psychedelic influences that create eleven superb, excellently produced songs. Contrasting light and dark, the album skips from fuzz guitar and bass heavy riffs ('The Crossing', 'Travesty As Usual') to more chilled out, experimental offerings ('Half Mast', 'Coffin Lilly') that conjure up images of a doomier Masters of Reality.

Lyrically, the album contains a mixture of the mystical (that traditional stereotype of doom) and the almost socio-political cynicisms that were evident on Divine Propaganda. Yet it is all beautifully crafted, whatever the song or subject matter.

'Graven images idolize, based on cold ideology, based on lies and hypocrisy.' ('Travesty As Usual')

It would be almost rude of me to highlight any one particular song from such a fruitful collection, but it would be impossible not to be drawn to the (aptly) central track on the album. If Mother Teacher Destroyer isn't album of the year, then 'Magdalene' is most definitely its song. Majestic and brilliant, it manages to encapsulate the differing moods of the whole album - a melodic beauty interspersed with a huge riff and mesmerising vocals and lyrics - reminiscent of Soundgarden's writing prowess at the height of their powers. It's worth the price of the album alone.

If it's comparisons you're after, then Mother Teacher Destroyer brings to mind the very best of the Melvins, early Black Sabbath, and the aforementioned Masters of Reality and Soundgarden, combined with, inevitably, The Obsessed and Saint Vitus. However, drummer Dave Hennessy and bassist/vocalist Bruce Falkinburg deserve equal credit - this truly is a band effort. Yet it is simply too hard to ignore the draw that is the consistent genius of Wino.

Do not lose faith, my brothers and sisters! In a year when the supposed big hitters of our beloved genre(s) have either been missing in action or just firing blanks, we all should have known that we could rely upon one of the creative pillars of heavy music to bless us with such a magnificent offering.