I arrived rather late for this gig, a rugby match and a huge amount of beer having waylaid me, and so managed to miss the two opening acts. Arse. Still, I made it just in time for the mighty Bumsnogger to take to the stage, and, suitably refreshed, I've never enjoyed this band more. For those of you yet to experience the five heads and two speeds of the 'Snogger, allow me to elaborate. This is the only sludge band I've ever discovered that could conceivably be described as fun - no mean feat when you consider the band this bunch are most readily compared to are a certain bunch of joyless lackwits from Corby. 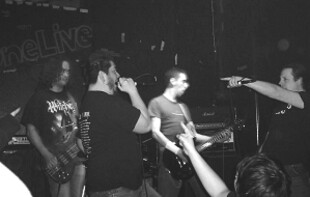 The next band up, Leed's Red Stars Parade, were an unknown quantity to me, but I'd heard good things, not least comparisons to such luminaries as Neurosis and Mastodon. That's some tough billing to live up to, and for a few minutes it seems that technical problems might not give them the chance this evening, as the bass player snaps a string with his first pickstroke. They deal with this situation calmly, despite a torrent of good natured heckling, and then firmly shut everyone's mouths with a display of musicality I've never before heard from a band from this side of the Atlantic, let alone an unsigned act. 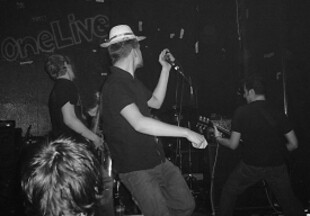 They begin promisingly, with a riff owing a great deal to the Hydrahead sound (if such a beast exists), but they really grab me with a sharp left turn into a massive groove that literally leaves me open-mouthed in awe. I am now completely under their spell, which is only broken when the bass player (unlucky chap, this one) manages to blow the fuse in his amp. They quickly surmount this second setback, and continue to weave a web of grooves, soundscapes and pummelling tribal beats that Neurosis would be justly proud of. The only slight criticism I can make is that vocalist's occasional forays into emo-esque singing are ill judged at best, but, to be honest, the guy had to do something to draw the rapt audience's attention away from gargantuan efforts of the three musicians behind him (I think that hat probably did the trick - see pic). This band are amazing - if they don't go all the way, there's something wrong with the world.

Mistress come onstage to a packed room and with all the nervousness of a rabid dog, so great is their assured confidence, Dave Cunt doesn't think it worthy even introducing themselves. The crowd reflect the intensity of the Birmingham five piece's fast-paced and amazing set. Sticking a mix of the new, more focussed songs such as 'Rat Piss' with older numbers like 'God Of Rock' (which sounds as fresh as it did when they released their self titled album a few years ago). Mistress, during their roughly half-hour set, fly through the blastbeat and almost grind parts of songs like 'Stunt Cock' and slow it down for excellent newbie and album highlight from The Chronoviser, the delightfully titled 'Piss For Blood, Shit For Brains'. In a brief spell on the floor, Dave faces the drums and screams his vocal chords to shreds, even handing the mic to someone at the front and punching someone full in the face for getting in his way. A surprise cover of Mercyful Fate's 'Black Funeral' complete with theatrical hand gestures ensures this is a Mistress set to remember, as well as finishing with a cover of Bad News' 'Drink Til I Die', which sends the crowd into raptures. Thoroughly unpleasant and awesome at the same time.