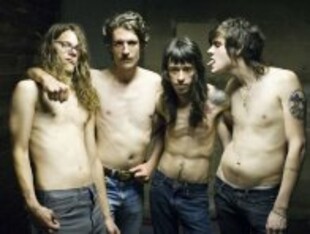 Danava are four uncompromising musos from Portland, Oregon and their self-titled debut album is a five-song feast of super-heavy, synth-rock craziness. They have an element of space-rock, late 70's prog, some 'Technical Ecstasy' era Black Sabbath riffing and a little of Flash Gordon for good measure. It's retro but also very modern in its general feel, extremity and outlook. I caught up with main man Dusty Spinkles.

I have to say that I can't stop listening to the album right now. It's a really fresh sound. How did it all come together for you guys?

Well, thank-you very much. I think it just came about naturally, really. From my perspective I really wanted to hear music where everyone involved was just going as strong as they could. We just cranked everything up.

Kemado seems like a cool label to be on right now.

I agree and we love working with them. They go above and beyond being a label.

OK, so how do you go about writing the songs? They're pretty epic.

Well, they come rather naturally. I usually just sit around and play guitar or organ until something really pops out and then go from there and together we decide what's too much and what needs more.

Partly, I get a sense of an updated space rock vibe from the album. It's

a very underappreciated genre, and early Hawkwind is particularly

fantastic. Is that something you guys would agree with?

Well, it's definitely in there but it wasn't an angle we were aiming at or anything. It's more of a love for the instruments involved and Danava for me is a reflection of the music that made me love music when I was a child. Loud everything and synthesizers sum it up.

Pronounced "don-uh-vuh" right? Where does the name come from?

Yes... we were named by our beloved former synth player Rosy Cross, the master of band names. Danava, in one word, is a demon. It's all too much to explain exactly who and what Danavas were, but for me it simply refers to the lower levels of humanity or the dark side of us all. Using the name, for me, is a personal challenge. We're not trying to be "evil" by using the name.

And I also get a subtle sense of the 1980 Flash Gordon movie in the logo and the start of 'Eyes in Disguise'. Is that right? Are you into sci-fi generally?

You got the nod. That movie kicked my ass when I was young. I was four when that came out and everything about it (well, except that script) just floored me! So the cover is a nod to that whole thing because it shaped me in many ways, and I'm not some sci-fi buff or anything like that...

And who did that awesome logo for you?

I did that logo actually.

I've heard that live, you guys do some pretty mind bending playing and jams. What can people expect from a live show when you make it to Europe?

Who knows, really? All I know is we'll play with every bit of ourselves and sometimes things end up sounding like they're bending over and about to collapse. We love playing live but I don't think we think of ourselves as mind-bending!

What kind of people are coming to your shows right now?

Anyone and everyone, really. I'm getting better and not discriminating between people and their cliques. We've seen about everybody except politicians and cowboys, I guess... that's too bad!

And how was it playing at SXSW Festival this year?

Kind of a nightmare but a fun one... We made it through OK. We were a little nervous because we have way too much gear and being quick about it is a bitch.

Shame. Do you think lighting is an important live element?

Well, yes, it can be, for sure. Lighting is important for damn near everything, right?

Haha, yeah right, so what are your inspirations?

Well, for me, everything is inspiring. If you're looking for bands or something, I wouldn't dare try to sum that up. But music in general is inspiring, whether it's great or complete shit. I'm glad it's what I can do.

There are some wicked, fresh-sounding retro bands coming out of the States right now, like you guys, Titan, Saviours and Witch. I first heard of Danava from the original version of your track 'By The Mark' which is on Kermado Records scene-defining 'Invaders' compilation. Do you feel any kinship with the other bands around or does falling into a potential scene not appeal?

Oh yes, we feel a kinship with them as people first and foremost. As well as other bands who are nothing like rock whatsoever. We definitely don't feel like we can fit easily into a scene. There's something in us that scene people always have a problem with. We don't give a shit about fitting in, never have and never will.

I think you'd go down a treat over here at festivals like Glastonbury and All Tomorrow's Parties. I guess that's something the band would be into?

Of course it is. We really look forward to coming over. Some of us have never been across the ocean and are dying to do so.

The self-titled debut album is coming out right now in the UK, but when

can we expect to hear some new material from Danava?

We are recording our next album in New York, starting on May 29th. If we finish in time, you'll have another record by October. And don't expect anything from Danava ever! It's a different album, yet it's still us.

Apart from that, what's the general plan next?

Get the album out, and tour a bit and get to the third one, I suppose. I have no idea beyond tour.

'If they're overlords, why do they hide?'

Because people are very sensitive to change. More and more though we are all becoming ready to live in harmony with everything we see and feel. Everything is changing and I couldn't be happier about it! What is it that's hiding down inside of you and how is it affecting you?

Danava's self titled debut is available now from Kemado Records.