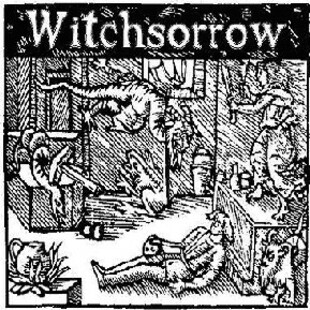 When Lee Dorrian and Bill Steer left Napalm Death, you probably wouldn't have placed either of them in massively respected stoner and doom bands later on. The fact that both did (in Cathedral and Firebird respectively, of course) is something of a curiosity. Is there, after a few years, a lure for purveyors of fast harsh music to these mellower tones?

This argument is of course very weak (it conveniently forgets other post Napalm bands that aren't in the slightest bit of the genre - Godflesh for example), but the fate of another grind band recently drew comparison. Mfkzt are a band you may never have heard of - they played grindcore up and down this country for several years, releasing a few demos along the way. When they split last year, vocalist Rob decided to concentrate on his excellent psychedelic stoner rock band Cicadas (search the name on this site for a review of their promising demo). So, all that was left to emulate the Birmingham legends was for guitarist Nick to form his doom band. And lo and behold, here we are - with the emergence of Witchsorrow.

We spoke with Nick about what lays ahead.

What prompted the change in musical style for you?

When I was at school I got very heavily into the stoner / doom / sludge stuff that was making waves at the time. I'd tape songs off Kerrang! and Metal Hammer CDs, stuff like Cathedral, Iron Monkey, Orange Goblin, Electric Wizard, Acrimony, and whenever I had money to spend on records, it was always that kind of stuff I'd go for. Until now, though, I've never known anyone as into the same kind of music that I wanted to play as I am. People I spoke to about it were more into trying to get the ultimate heavy sound, like SunnO))) type stuff, whereas I always wanted to focus on keeping it doom-metal."

Do you prefer playing slower now?

"Yeah. I really love listening to black metal, death metal, thrash, all that fast stuff, but I can't play it for toffee. When I was learning guitar, it was all bands like Korn that were cool and everyone was learning, so they were all terrible. It didn't take much virtuoso playing to be better than the other kids at my school, a Fu Manchu blues solo would do. That's mostly how I learned lead guitar, playing along to Fu Manchu and Monster Magnet. 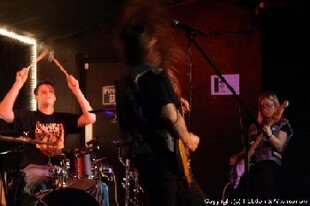 If I were at school today, I'd probably be trying to play as well as Dragonforce or Trivium or Bullet For My Valentine. I could learn now, but I can't be bothered really. For me, Tony Iommi is like the ultimate rock guitar player, he's not fast, he's not overly heavy, he's just got a load of killer riffs, and his solos are all catchy as fuck."

Witchsorrow are completed by Nick's fiancée Emily on bass and Morrell, of the excellent London sludge / hardcore hybrid Koresh, on drums.

"I first came up with the idea for the band about two years ago while I was still in Mfkzt. After trying out one drummer, I stumbled across Morrell's MySpace one fateful night and decided to send him a message. We met before when Mfkzt and Koresh did a gig together, although I don't remember a great deal about that day. I think he was rather surprised when I asked him out of the blue like that, but he was taken with the idea of playing in a proper true doom band."

And any worries about being in a band with your wife-to-be?

"Only that she hadn't been in a band before, but it's turned out great. She's as into the doom as much as I am, so I knew she'd be completely into the music, not like some girl who's just in the band because she's shagging the singer or whatever. Certainly there was no concern that she might turn into Janine from 'Spinal Tap'" 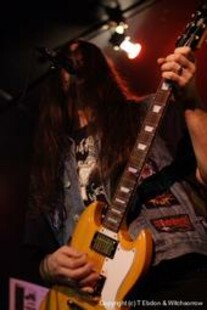 At the start of your journey, do you have any aims or goals you wish to achieve in Witchsorrow?

"I can't speak for the others, but I'd love to get signed and put out a record. At the moment we're looking into doing a vinyl as our first proper release, although that's sketchy at the moment. We shall have to wait and see, but that's something I'm really determined to do.

We have four songs written, but we're writing more. That's our focus at the moment, writing more songs. There's a couple of riffs so far that are coming along nicely, very Candlemass."

Witchsorrow seem to have gone out of their way early in the band's life to define themselves unequivocally as "proper doom", as Nick puts it. From the stereotypical name to the range of influences you are left in no doubt about the bands sound before you even hear them (the music, from early gig recordings only so far, confirming the assumption).

"We're not a Circle of True Doom band, but I like that idea of 'keeping doom as a form of heavy metal', that sits very nicely with me. (We are) True Doom Metal. That's what separates us from bands like Atavist or Moss, we are a heavy metal band. That's not some brag about being 'true', or being 'more metal', just that we've got a very pronounced influence of bands like Iron Maiden and Bathory in us, rather than just trying to be as godlessly heavy as possible."

And Witchsorrow's influences, need I ask?

"All the usual doom suspects like Trouble, Sabbath, Vitus, Solstice, Cathedral, Solitude Aeturnus, Candlemass, Reverend Bizarre... But also stuff like Maiden, Bathory, early Emperor. I like that quite bleak, epic sound of 'Blood Fire Death' era Bathory, or a song like 'Into the Infinity of Thoughs' by Emperor or 'At the Heart of Winter' by Immortal. We don't sound like those bands, but I really like that vast, desolate, cold feeling, and I think we've got a bit of that in us, too." 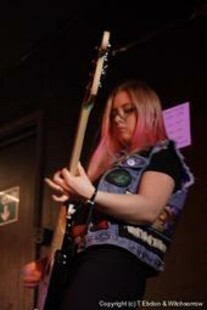 Beyond the band name, will you be subscribing to the whole list of doom stereotypes, as it were?

"Yes, because that's what we think is awesome. Old churches, magic, witches... I love all that stuff. There's loads of old houses and woods and stuff near where I live, so it's hard to get away from it all, haha. We live really near a place where people used to believe Satan landed when he was banished from Heaven. That's wicked, that is.

There's something about doom metal that makes me think of all that stuff. I'm really into history as well, which might account for some of the lyrics about people like Vlad the Impaler. History, local legends, stuff like that is way easier to write about than my inner-pain or my so-called 'childhood'. I can moan like nothing on earth, but not in lyrics, then it's all business. Don't be surprised in future if you hear me singing about some sort of nun/witch interface. "

Witchsorrow have only really started their adventure, yet have alread shared stages with the likes of Blood Island Raiders and Premithon ("a fucking killer death metal band from Fleet"), and have dates lined up with, among others, The Gates of Slumber and Hordes of Satan (check the ninehertz Live Dates section for listings, or Witchsorrow's myspace page - www.myspace.com/witchsorrowdoom).

With an increasingly vibrant (if that is the right word...) doom scene in the UK, is there anyone in particular you would like to play with?

"The UK doom scene has some great bands - Centurion's Ghost, Moss, The River, Atavist, The Prophecy, Sloth, The Lamp of Thoth etc. I can't wait to play with (one time Mfkzt tour partners) Flatlands again as well.

Internationally, we're playing with TGOS, as I mentioned. The Hidden Hand would be a cool band to play with, and Burning Saviours from Sweden, too. If you don't know them, check them out, very cool vintage doom on the excellent I Hate label. Sounds like early Pentagram and Witchcraft and stuff like that.

As far as big UK bands go, I'd love to play with Cathedral. They're one of my favourite bands, their early stuff for me really nails exactly what I want out of doom metal. Mfkzt played with them at Bloodstock, that was pretty killer, although I'm sure we were the only people there who thought that."

So, there we go - we have come full circle back to Cathedral, which feels like a nice place to end. Keep an eye out for Witchsorrow - it sounds like it'll be a great adventure - and check them out when they play near you. In the mean time, I'll leave the last words to Nick, with Witchsorrow's motto: