Beaten Back To Pure Folks With Blinders On Need Not Apply

Beaten Back to Pure first came to my attention a few years back, when someone played for me their second album, the excellently titled Last Refuge of the Sons of Bitches. Mixing classic rock, sludge and straight up metal, it immediately became a favourite. Subsequent purchases of their debut, Southern Apocalypse, and their new album, 2004's The Burning South only served to strengthen my passion for this band. ninehertz got in touch with vocalist Ben to see how the release has gone, and what 2005 holds for Beaten Back to Pure.

While we are big fans of Beaten Back to Pure, we don't know too much about you guys (here at ninehertz, and on this side of the Atlantic in general). What are your backgrounds - what bands did you play in, what music did you grow up listening to, and what do you listen to now?

'Fuck man, I'm drinking so I'll hit the high points. This is all of our first signed band. Richie (guitar) used to play in a Van Halen Tribute band called Eruption, with Scott Travis (currently of Judas Priest), our bassist Tim, played in Afterlife, but I don't know much about them and Chuck (drums) played in a grungy sort of band called Jim's Fault. We forgive him. If memory serves they were pretty good. We ALL grew up listening to different shit. Richie and Slam (Tim), much more mainstream or old school (Lizzy, UFO, Van Halen, et al), me and Vince (guitar) had a common thrash metal background and Chuck was a metal head, currently we listen to a lot of different shit - I'm into the new Engorged album, Mastodon; while Vince is firmly into Isis and Old Man Gloom; Rich and Slam don't listen to much which keeps a lot of new style outside influences, they still jam Lizzy, UFO, etc...Chuck is kinda into prog and classic metal. All these influences help us keep shit genuine. 100% BBTP.'

What are your dreams for Beaten Back to Pure?

How would you describe your sound? When I've tried to describe your sound to friends when I've been ranting about how they need to hear your music, I've always struggled to convey everything that you possess - the only band I can ever seem to really compare you to is Rwake, yet there's a massive difference.

'Exactly. I see what you're saying about Rwake, they kill and do a lot of different things, and so do we. But we do two TOTALLY different things. The common thread MAY be some classic guitar work occasionally in both bands; otherwise, we dig each other's music and respect each other a lot. You're right though, you should hear it and then cast judgement. Folks with blinders on that won't wander outside the lines of black/death metal, need not apply. Veteran ears preferred.'

What bands are really exciting you at the moment?

'Hmmm...Engorged. Where Monsters Dwell is killer. I'd like to meet them dudes. Also Throttlerod. Arsis (homeboys making good). Old Man Gloom and Mastodon. That's this weekend so far.'

Tell us about The Burning South - do you feel you as a band have grown stronger/better over the course of your three albums - is there a natural evolution to your music? Have you seen a visible rise in interest for Beaten Back to Pure?

'Well, the amount of website traffic is up. That's a good sign. I honestly do think we've progressed, but I think our previous album was strong too. But Burning South has an edge, plus it's findable, unlike Last Refuge Of The Sons Of Bitches. The day we don't progress and simply rehash the same song structures, somebody should come and pull our plug.' 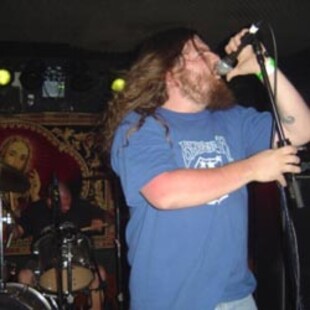 How did the change of labels from Retribute to Dark Reign come about? What advantages has this given you?

'Not really by our choice, Retribute didn't seem that 'into' doing a third record, so I went shopping, and about two weeks later we did a contract with this dude in L.A. (TDR), and so far it's been excellent, he's doing shit in the US that the other dude was doing in Europe, this guy has more scene veteranship (working with Black Flag and St Vitus in the 80's as an employee of SST), so we're happy. No unkind words about Chris and Retribute. That dude was very cool also.'

What was it like playing at Emission from the Monolith this year?

'Very cool. We're doing it again in '05. You should come over, that place is cool. It's a different vibe, you have a big crowd and they're all supportive, not a lot of dicks in the back of the room with their arms folded saying "Impress me, fuckers", a lot of folks were familiar with our tunes and really seemed into it. That sort of shit makes it worthwhile.'

There's a link with Beaten Back to Pure and Axe-Handle (side project featuring members of Alabama Thunderpussy) and also there's a hint on your website that there's going to be a Beaten Back to Pure/Cable split in 2005 - do you have any further details? How did these come about?

'Vince only produced the Axe-Handle record, none of us are "in" the band. That's just 3/5 of ATP guys (Eric, Bryan, and Ryan) doing a different thing. The split with Cable is a project for next year (we're cool with them dudes, that's about all of that) and a split 7" with Gideon Smith and the Dixie Damned and also another split 7" with Parabellum. Staying busy.'

Finally, what are your plans for 2005? Is there any chance of getting Beaten Back to Pure over to Europe?

'Man, that's one of those goals I'll never voice for fear of a jinx. Honestly, Europe would have to be salivating for it and a promoter would have to be willing to do a lot of work up front. Both of which are slim odds. Love to do it though.'

Beaten Back to Pure