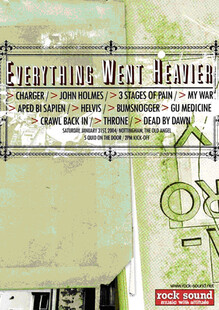 Nottingham has always been an important place for underground music in this country - all the way from Iron Monkey's adaptation of the southern American sludge to mid-period Pitchshifter's industrial crossover - UK innovation in heaviness can often be directed back towards the Midlands city. So it comes as no surprise to find a double all-dayer hosted in Nottingham featuring the best of upcoming British metal - namely Everything Went Heavier, and it's more hardcore flavoured relative, Everything Went Faster (which took place the following day).

The birth child of Junior Showtime promotions - whose members (Chris, Andy, CJ, Mars, Alex and other 'helper monkeys') can be found in Bumsnogger, Cape Canaveral and Jesus of Spazzereth - Everything Went Heavier came to be after the wealth of talent available to put on was too irresistible to constrict to a mere standard gig.

'We couldn't decide on 5 bands and though fuck it, let's do a weekender. I think it was inspired by an all-dayer we went to in Brum organised by <a href=http://www.thecommunion.co.uk target=_blank>www.thecommunion.co.uk</a> where Charger, Labrat, Palehorse, Mistress and a few others played. It was an awesome day and we thought 'we can do that'', Chris explains.

Organisation of the event took around two months, with the most problematic time coming with the cancellation of bands at the last minute - Charger and Bumsnogger were forced to pull out near the time - yet this gave opportunities to other bands (Eulesis, for example, were a late addition), gave breathing space for the bands still playing and enabled a later starting time.

What was particularly noticeable, and it has to be said, impressive, was the difference of styles of bands on the bill - from the doom drone of Eulesis to the more melodic GU Medicine to the full on assault of Helvis - especially when taken into consideration that variety was constricted due to the EWF event the following day.

'It'd been shit if day one had ten bands who all sounded like Electric Wizard and day two had ten bands who sounded like Converge. We had to mix things up to keep it interesting, but each day still kept things under a similar style. I think we had a good balance, and it was nice to see a lot of punters came for both days.'

And the result? From all accounts, a resounding success, and a fantastic day out.

'I got to see the cream of the UK underground in my favourite pub, got pissed and had a great time, met lots of cool new people too. It was rammed both days and everyone went home happy. It's given us the confidence to do another weekender at the end of May, as well as doing gigs each month. The good thing about putting gigs on is that people (hopefully) return the favour and put us on in their town. It's all about helping each other out.'