On a cold Tuesday night last December, several of the collaborators of ninehertz congregated at the Boardwalk in Sheffield. With only the prospect of witnessing a great US stoner rock band, Five Horse Johnson, for the first time (and maybe also a couple of pints) warming the soul and keeping our minds from the 6am alarm clocks awaiting us for work the next day, the idea of watching a support act we'd never heard of wasn't exactly the pick-me up we would have chosen. When we found out that the support act was a one-man band, playing to a crowd of less than twenty, we shifted slightly uncomfortably.

From that moment on, however, our apprehensions vanished. Taking to the stage wearing a suit, against a backdrop of an altered US flag, Man Incorporated proceeded to blow everyone in the room away with his punk/garage/god-knows-what songs, often only a minute long, played on bass guitar, kick drum and vocals, all by himself, ensuring every eye was fixed firmly on the stage.

The most fascinating aspect of Man Incorporated's live performance was that you had no idea how seriously to take him. Brilliant opener 'Beer For Man' raised a chuckle with its seemingly innocent title demand, and the Man himself can be seen drinking away shouting at anyone who passes him during the headliners set, with a huge grin. Added to this the dry humour that intersperses his set, and you have, what appears on the surface, a great yet lighthearted 'band'.

Yet as the set continues, a more intense, serious side begins to emerge. Man begins to attack his instruments with all his considerable might, the veins on his forehead begin to bulge as he spits out ever increasingly socio-politically conscious lyrics. He attacks a wide varied range of victims - from the mob mentality of jock culture (especially on 'Fuck the Team') to the corporate intensity of modern day working life in the USA ('Fired'). But despite his left wing stance on these issues, as he reminds us throughout the gig, he 'ain't no fucking hippy!'

Hailing from Detroit, Man (aka Matt McGuire) played in Forehead Stew, before deciding to quit in favour of travelling around.

'I still had a burning desire to perform. I was spending my winters in the Colorado mountains snowboarding and my summers in Detroit so I couldn't hold together a band. I decided to take matters into my own hands and do it all. I wrote "Beer for Man" and put it together and it felt fucking great. I was possessed', Matt explains.

Using a $50 bass and a borrowed kick drum, with a sound he describes as 'drunken existential ranting' (and a tribute biography on his website describes as what Bob Dylan would have sounded like if he had heard the Swans and run out of booze), Man began to write and perform. The fairly unique setup of the 'band' meant he was bound to the ethics of DIY for promotion, recording, gigging...practically every aspect of a band's life.

'As a solo act I have to do everything myself. Booking, writing, carrying all that gear around. It's liberating from a creative point of view but logistically, it's a heavy load. I do get all the drink tickets and the loot though. I like that part. In a full band you have trusted ears to bounce ideas off. Sometimes I wonder if my idea is good or if it really stinks. There's nobody to tell me when something sucks until I hit the stage and the crickets are a chirpin''

'When I play in front of a new audience in a small college town they often appear frightened and/or insulted,' describes Matt on the initial reactions of crowds when they realise it is really just him, but 'home in Detroit it's always a big lively audience. They shout the words to some tunes and heckle me constantly. It's very comical. A big drunken party.'

So, while we're on the subject of the live arena, how did the Five Horse Johnson European tour come about? While I'm all for mixed bills, the combination of Man Incorporated's politicised punk seemed slightly odd when followed by the bluesy stoner rock of the headliners.

'Scott Hamilton, owner of Small Stone Records digs Man Inc. So I gave him a bunch of promotional shit and he's on the phone hookin' it up, sending it out. I've known Five Horse Johnson for years; we played shows together in the early 90's when I was in Forehead Stew so when Scott Hamilton approached them with the idea they were into it. The tour went great. Good crowds. The Five Horse guys are a riot! I was laughing the whole time', he explains, of a tour he also describes as one of his best experiences.

The lyrical content of the songs appears to be a very important aspect of the make-up of what is Man Incorporated. Even 'Beer for Man', on repeat listens, isn't merely the throw away ode to alcohol it appeared when first heard - more a tirade against government control and the anti-alcohol restrictions of right-wing America. 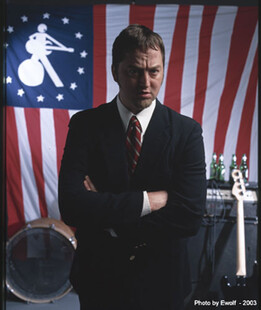 '[Politics are] very important indirectly. I try my best to write about politics without being political. I never preach my political view or tell someone how to live, vote, believe, etc. Nothing could be more annoying or hypocritical. I simply express myself from my point of view through my own personal experience. A lot of this has political undertones and ramifications. If a religious fanatic walked up to me and took the beer out of my hand I would smash their fucking nose down their throat. Yet they pass laws against purchasing alcohol on Sunday's and I'm supposed to sit idle...Fuck no. I can't track them all down but I can stand on stage and scream "God damn the Christians!"'

With new album Machine (of which he describes as being happy with, but 'not blown away, the next one will be better') out now on Times Beach Records, Man Incorporated is going to be around for a while to come. Which is good news for everyone, especially with his promise of a return to this side of the Atlantic at the end of May. Until then, check out the website, download the mp3's and buy the album. It's been a while since anger was so much fun.

Interview by Carey and Pete C.

Thanks to Matt McGuire. Picture by e-wolf.