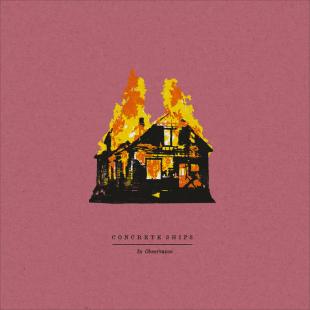 Disclaimer, I am a fellow resident of the city that has spawned Concrete Ships. Lincoln is and always will be a microcosm when it comes to alternative music and that's where the appeal exists. A small, but perfectly formed network of bands means the use of creative spaces, venues and indeed band members is shared in a way you just don't get with other cities. As such, all three members of Concrete Ships moonlight in other bands (Luna's Call, Low Moder and Temple Steps).

This all distracts from the main event here, the band's utterly crushing debut. In Observance has been recorded since New Year 2019/20. Recorded in a remote castle in Lincolnshire's backwaters, the drum sound is the first thing that should be mentioned. Cavernous and with a natural reverb most bands would kill for, it sounds so full and satisfying that its underpinning of the whole record gives the whole affair a towering and intimidating sound.

Live, the band crank the volumes to skull-shaking levels and this comes across perfectly here too. Bassist and vocalist, Chris Thompson competes for attention with his half-screamed vocals over the cacophony, but it's also a sound that is perfectly crafted. The idea of repetition is nothing new, but fuck, do Concrete Ships test out the theory until it is raw and ragged. The idea of looping a riff until it becomes uncanny and ridiculous is something the band have zeroed in on here and at times enter the third-eye cleansing state that bands like Acid Mother's Temple or Circle occupy. This isn't however your average mushroom kingdom state, rather a whitewashed, stark and monotone aesthetic that has more in common with the bleak stances of bands like Joy Division or Codeine. This is no miserablist expression of nihilism though, more an abstract, artistic vision.

Album opener Flotilla harks to the vocal style of Chris's former outfit Buffalode, questioning inner monologue as screeched vocalisations mean you get that paranoid edge that pervades the whole record from the very start.

Indeed, lyrical imprints on the likes of Clouds talk of the sky falling down, how very Henny Penny. Still, this was recorded just before the impending doom of COVID-19, so perhaps Concrete Ships inadvertently sealed all of our fate?

The overall feel of this record is one of claustrophobia. I can attest to this being the case at the band's shows too. Volume and unrelenting battering of the senses can mean nausea and existential panic in the observer. A friend who came to see them in March 2020 had to leave the room after just a few minutes due to being overcome by the sensory overload. If that's not the kind of review bands strive for, I don't know what is.

The mechanical sturm und drang of their sound never really lets up. Even in the SWANS-esque swing of Vibration White Finger that feels less full throttle, there's a sense of the uncanny and menace hanging in the air like vapour.

That's what you'll not be able to shake throughout In Observance, that sense of dread, something on the edge of your peripheral vision, that darkness round the corner. One of the more unnerving and uncanny records you're likely to hear this year, it's a stunning debut. One to turn on and drop out to, Concrete Ships have outdone their heavy namesake here.